How do insurers deal with counterparty credit risk? Mudi Ugono discusses the findings of a survey carried out by the Insurer’s Hidden Risk From Reinsurance Recaptures Working Party 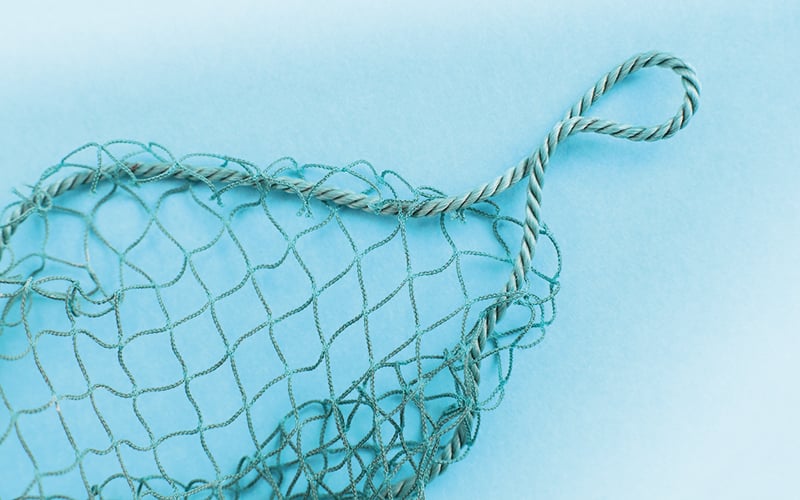 The capital-intensive nature of writing annuities under Solvency II (SII) increases incentives for UK insurers to use reinsurance in pursuit of business and growth objectives. However, this introduces reinsurance counterparty risk to insurers’ balance sheets, presenting a particular risk management challenge that is not straightforward to deal with. The IFoA Insurers’ Hidden Risk From Reinsurance Recaptures Working Party was established to explore the various risk management approaches of insurers that are exposed to reinsurance counterparty default or other recapture events.

Where is reinsurance ceded?

In a survey of UK annuity writers, participants were asked to rank their top three reinsurance destinations for annuity risks; the results are summarised in Figure 1. 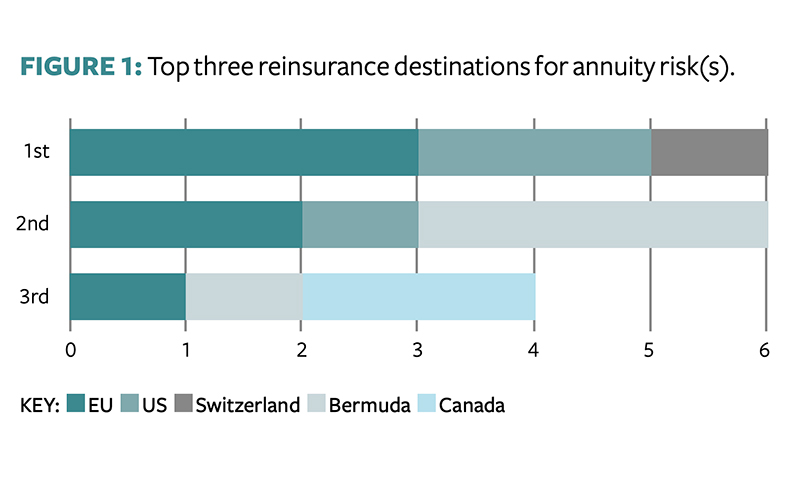 The risk margin’s (RM) size and sensitivity to movements in interest rates is often cited as a primary driver for reinsuring UK longevity risk offshore. However, half of respondents identified the EU, where the RM rules are identical, as the top reinsurance destination; this looks surprising. The choice could be driven by European regulators taking a different view on judgmental aspects of the SII regime, such as longevity stress calibrations, diversification between longevity and other demographic risks, or by potential retrocessions outside the SII regime.

Why does reinsurance give rise to hidden risks? 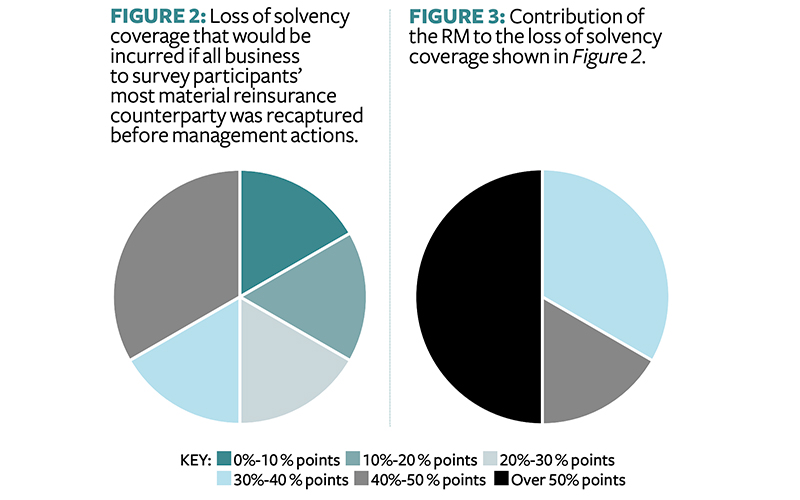 All respondents assumed that reinsurers default instantaneously when setting risk limits. Half did not assume subsequent management actions, which could be conservative. The remaining respondents assumed between one and three management actions when setting limits, with all assuming that they would be able to obtain replacement reinsurance within six to 12 months post-default. This is likely to be based entirely on expert judgment, as there is no stressed market data to validate this assumption.

All respondents have at least one collateralised annuity-related reinsurance treaty and allow for collateral in their exposure calculations.

Collateral reduces insurers’ exposure to reinsurance counterparty risk and partially protects the insurer from the impact of a reinsurance recapture. However, collateral doesn’t fully cover the combined increase in RM and longevity risk SCR, less the release in counterparty risk SCR, that insurers would need to hold upon recapturing previously reinsured risk. Figure 3 shows that at least 30% of the loss of solvency coverage on recapture is attributed to the RM.

Reinsurance contracts are complex legal documents that are binding for both counterparties. Figure 4 summarises the main recapture provisions found in respondents’ reinsurance treaties. 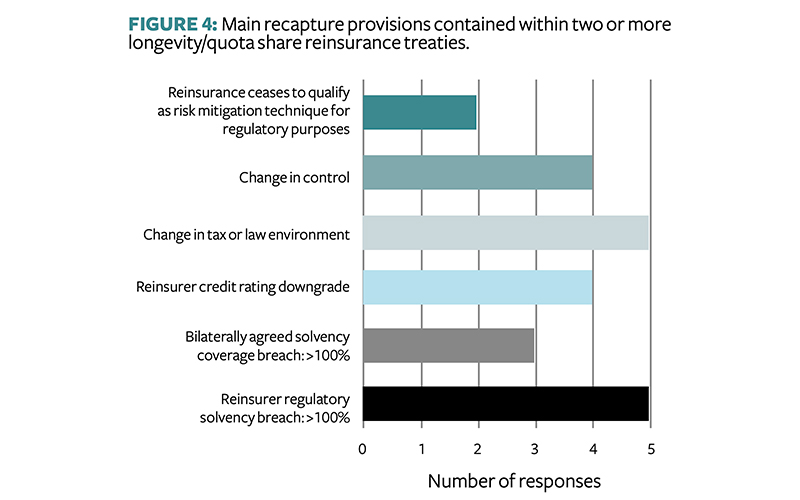 The reinsurer regulatory solvency breach recapture provision is noteworthy given its potential to cause a disorderly market event. The inability for insurers to recognise the full benefit of reinsurance within the SCR following a breach of a reinsurer’s regulatory solvency could lead to a run on the reinsurer. This could have macroeconomic consequences if a single reinsurer was a counterparty to several insurers. It is uncertain whether insurers would be able to find replacement reinsurance in such an event, meaning they may end up holding recaptured risks for longer than anticipated. 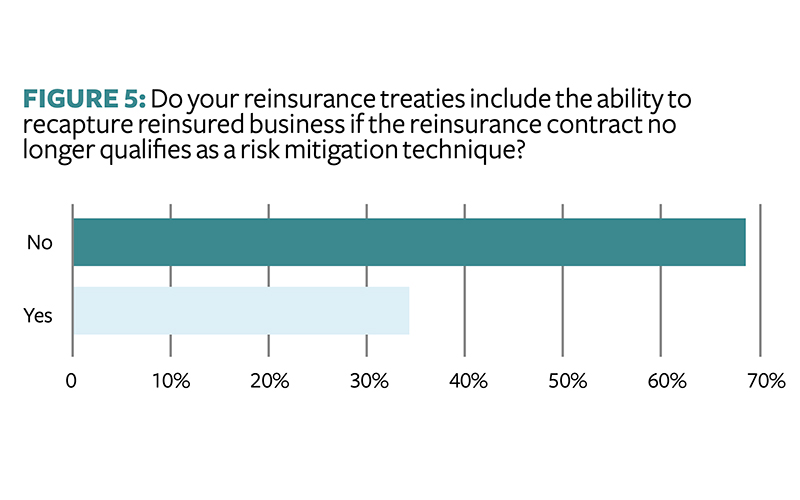 The SII regulation sets out several requirements that must be met for a risk transfer mechanism to qualify as a risk mitigating technique. The lack of treaty clauses allowing an insurer to recapture reinsured risks if the treaty is no longer deemed effective for SII purposes could leave some insurers locked into a contract that they are unable to take credit for on their SII balance sheet and SCR. This means the insurer may need to recognise losses, even if reinsurers hadn’t breached their solvency coverage.

All respondents explicitly considered reinsurance recapture, default or a similar event as part of a reverse stress or scenario test since the introduction of SII. All except one insurer have identified management actions to rectify a SCR breach following a reinsurance event. This provides some comfort that consideration has been given to scenarios that could threaten an insurer’s viability.

However, consideration of more severe scenarios appears less well developed: half of respondents did not identify management actions that could be used to rectify a breach of the minimum capital requirement. This could reveal information about the board’s risk appetite in this area, and provide an additional lens for the board to challenge insurers’ capital risk appetites.

The working party is currently completing its analysis and aims to publish its full report early in 2022.

We hope that our output will support market practitioners and contribute meaningfully to the development and evolution of industry best practice in this area.

This article appeared in our November 2021 issue of The Actuary.
Click here to view this issue
Filed in:
General Features
Topics:
Risk & ERM
General Insurance
Reinsurance