The butterfly defect: Global connectivity makes us vulnerable to collapse

Aled Jones discusses how the environmental pressures of a complex global economy increase the risk of collapse, and which parts of the world are best placed to survive such an event 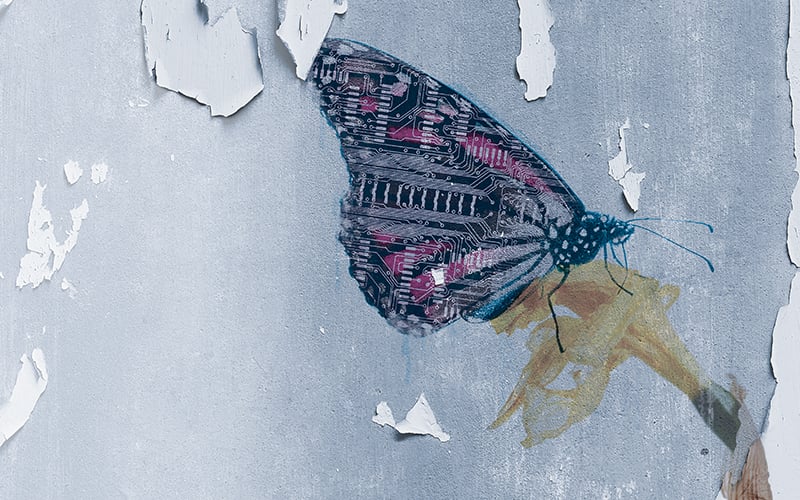 Human civilisation is highly complex, connected and global. For more than 200 years, the Industrial Revolution has allowed us to exploit large energy stocks, mostly through fossil fuels, thus boosting growth in global population and industrial output. The Green Revolution of the mid-20th century spurred further growth acceleration through increased agricultural production. This growth trend is characterised by substantial and ongoing increases in societal complexity. However, it is also accompanied by a strong and increasing pressure on the earth system.

For decades, scientists have explored the growing environmental impact of human activities. In 1972, the Club of Rome commissioned a study using the World3 model, developed by a group at the Massachusetts Institute of Technology, to better understand the broad dynamics of global systems and their relationship to resources, land use and pollution. A set of scenarios was published in The Limits to Growth, exploring possible futures under different constraints.

These scenarios saw overshoot and collapse as being a result of the “present growth trends in world population, industriali[s]ation, pollution, food production, and resource depletion”, and the researchers warned that if this trend continued, “the limits to growth on this planet will be reached sometime within the next 100 years.” Overshoot in this context meant that society would run out of enough energy or food, and the global population would collapse. However, it was possible to alter the growth trends within their model and develop a scenario that led to stability which met the basic needs of all people.

Several studies have attempted to quantify the physical limits that may lead to overshoot. One of the most famous of these is the ‘planetary boundaries’ framework, which defines nine ‘safe operating spaces’ that, if crossed, could trigger “non-linear, abrupt environmental change within continental-scale to planetary-scale systems”. Three of these nine boundaries (biodiversity loss, the nitrogen cycle and climate change) have already been crossed, risking catastrophic consequences for humanity.

Humans’ exploitation and destruction of ecosystems has led many to predict dire consequences for humanity. For example, a recent article in Scientific Reports by Mauro Bologna and Gerardo Aquino concluded that “a catastrophic collapse in human population, due to resource consumption, is the most likely scenario of the dynamical evolution based on current parameters. Adopting a combined deterministic and stochastic model we conclude from a statistical point of view that the probability that our civilisation survives itself is less than 10% in the most optimistic scenario.”

The increasing complexity and hyper-connectivity of the globalised economy has exacerbated society’s impact on the earth system and reduced our resilience to environmental collapse. A shock in one region is now able to spread more easily around the globe, leading to a higher risk of system level collapse – a phenomenon dubbed the ‘butterfly defect’. We have already seen these types of perturbations, such as shocks in the food system linked to the Arab Spring in the early 2010s, and to the COVID-19 pandemic in the present day. As a result, there is an increased risk of a global ‘de-complexification’ event, in which societal and economic complexity could undergo widespread reversal.

While most scientific research explores the causes of, and potential measures to avoid, environmental shocks, there has been an increasing level of interest in how these shocks propagate through our economic and human systems, to better quantify our resilience. Part of this research also explores what would happen if we failed to create the required resilience in time.

A study by the University of Notre Dame in the US – the Global Adaption Index (ND-GAIN) – considers a range of factors relating to climate change and uses several variables to generate country rankings based on an indicator of vulnerability. It explores each country’s exposure to climate disruptions and ability to mobilise adaptive action.

The best place to survive collapse

Building on the ND-GAIN study, Nick King and I recently co-authored the paper ‘An analysis of the potential for the formation of “nodes of persisting complexity”’ in the journal Sustainability, which developed a semi-quantitative screening of the top 20 least vulnerable nations to generate a final ranking of the nations best able to withstand a global collapse.

The ‘de-complexification’ event was classed as a widespread reversal of the trends of recent civilisation, potentially involving the collapse of supply chains, international agreements and global financial structures. This could happen during a ‘long descent’ – over years or decades – or very rapidly, in the space of less than a year.

The study ranked countries according to the most favourable starting conditions to survive a global collapse by examining self-sufficiency (energy and manufacturing infrastructure), carrying capacity (land available for arable farming and overall population) and isolation (distance from other large population centres that may be subject to displacement events). Of course, many other factors could be considered alongside or instead of these three indicators, such as military strength, access to resources, or strength of existing governance.

The study found that the top five countries best able to withstand a global collapse (Table 1) are islands or island continents, with strong oceanic climatic influence. New Zealand has the greatest potential to survive relatively unscathed, thanks to its ability to produce geothermal and hydroelectric energy, its abundant agricultural land and its low population. Iceland, Australia (Tasmania) and Ireland also have favourable characteristics, while the UK presents a more nuanced picture due to its complicated energy mix and high population density. Although the UK has generally fertile soils and varied agricultural output, its per capita availability of agricultural land is low, raising questions about future self-sufficiency.

The importance of the de-complexification study and others like it is not to encourage more billionaires to buy property and land in New Zealand, but to highlight that society is connected in a highly efficient and deeply unstable globalised economy. Actions are needed to address the interlinked risk factors of climate change, agricultural capacity, domestic energy, manufacturing capacity, and overreliance on complexity. We need to improve all nations’ resilience.

Actuaries are well placed to support better quantification of these existential risks and to understand how shocks in one part of our globalised system can quickly and easily propagate through to other parts. This complex risk analysis is needed to identify how we can increase the diversity and resilience of existing processes, and to highlight the need for action to reduce our exposure to such risks. Rather than simply knowing where the lifeboats are, we need to ensure the Titanic can stay afloat.

This article appeared in our November 2021 issue of The Actuary.
Click here to view this issue
Also filed in
General Features
Topics
Risk & ERM
Environment