After a pandemic-induced hiatus, the IFoA’s Public Affairs team returned to the party conference circuit this year, attending both the Labour and Conservative conferences in Brighton and Manchester respectively. 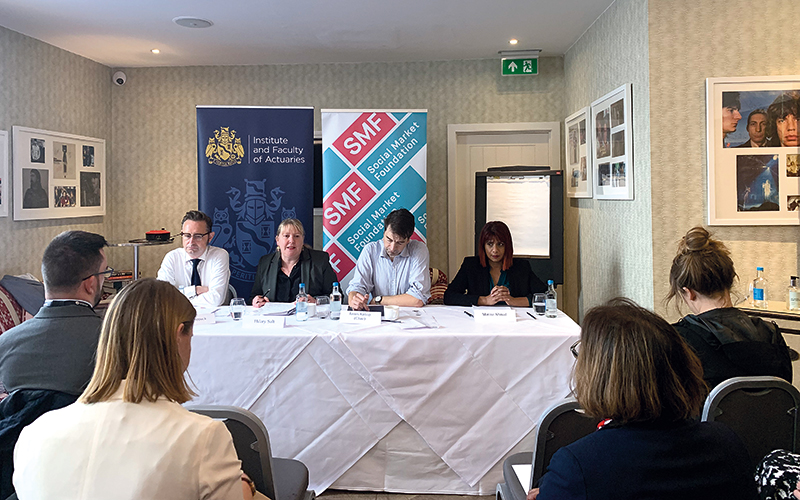 The party conferences provide a unique opportunity to engage with multiple parliamentarians and stakeholders on the IFoA’s policy priorities, and this year’s events felt even more important, given the lack of face-to-face engagement during the past 18 months. It also enabled us to foster new relationships (and cement existing ones), build the IFoA’s reputation as a trusted voice, and increase awareness of actuaries’ expertise on some of society’s biggest challenges.

This year, the IFoA partnered with the Social Market Foundation (SMF) to host a fringe event at each conference. The event at Labour allowed us to showcase the recently published report The hidden risks of being poor (bit.ly/IFoA_PovPrem), which considers the poverty premium in insurance. Hilary Salt (First Actuarial) was joined on the panel by Martin Coppack (director, Fair By Design) and Marina Ahmed (London Assembly Labour Group spokesperson for the economy), with James Kirkup (director, SMF) in the chair.

In Manchester, for the Conservatives, we discussed The Great Risk Transfer campaign (bit.ly/IFoA_GRTreport) and ensuring retirees make the best of the financial freedoms afforded by the 2015 pensions reforms. Hilary again joined the panel, alongside James as chair, to speak alongside Nigel Mills MP (Work and Pensions Select Committee member) and Peter Tutton (head of policy at StepChange).

Both events were well attended and showed the relevance of our policy work to the live political discourse within the major parties, as well as the joint desire among stakeholders to make markets work better for consumers.

This article appeared in our November 2021 issue of The Actuary.
Click here to view this issue
Also filed in:
IFoA News
News