Anthony Asher provides a critique of the dominant thinking within risk culture, and explains why courage will play an important role in forming a more virtuous approach 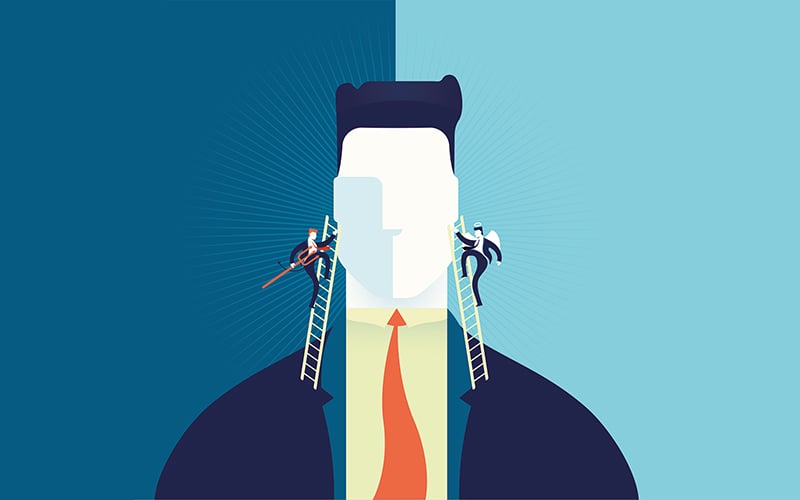 There is a dominant paradigm adopted by prudential regulators in their approach to risk culture, with vocal proponents ranging from relatively centrist proponents of free markets and smaller government, to Ayn Rand supporters and libertarians. By paradigm, I mean a set of preconceptions about a subject – in this case risk culture – from which it is difficult to escape.

The power of this paradigm lies partly in its relative simplicity, and partly in the fact that its justification of centralised power, and accompanying inequality, is attractive to those who hold that power. Table 1 summarises the dominant paradigm and contrasts it with an alternative that could be called ‘virtue theory’. 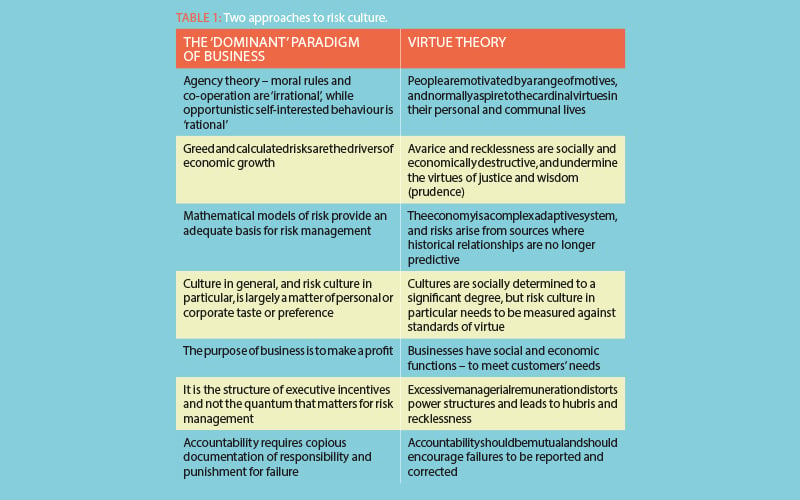 The extent to which this paradigm is ‘dominant’ is certainly debatable. In academia, it may be favoured by economists and finance academics – although many reject it. You would be hard pressed, meanwhile, to find support for it in psychology or sociology. Management academics and actuaries seem divided. The rise of environmental, social and governance issues in investment markets, together with disquiet at CEO remuneration, various banking oaths, and the Business Roundtable position on shareholder value, show that variations of virtue theory are widespread in business.

Calling this business view a paradigm might seem a caricature, if it were not for the fact that the regulators seem to be blind to the alternatives. As examples, one can consider the Financial Stability Board’s (FSB) Guidance on supervisory interaction with financial institutions on risk culture, and the UK Financial Conduct Authority’s (FCA) Handbook.

The virtue theory suggested here is based on the belief that the four cardinal virtues (justice, wisdom, self-control and courage) are universally normative and set the standard for personal and organisational behaviour. These virtues are, of course, subject to a wide range of meanings, but they are compatible with all of the major religions and philosophical positions of both East and West, and are usually found in the standards of all professions. They are also largely acknowledged in the FCA Handbook: its principles explicitly mention integrity and the cardinal virtues, although not the virtues of courage or speaking out.

Figure 1 provides a framework for understanding these virtues and their role. The virtues of justice and wisdom direct what we do to achieve our aims, while courage and self-control must be part of who we are if we are to act virtuously. Courage and justice define our relationships with others, while self-control and wisdom are not necessarily social in character.

The virtues must be based on integrity and constancy, and all are part of the personal and corporate excellence required to ensure that the financial sector fulfils its social purposes, which include risk management. Social purpose, in turn, determines what is required for virtuous practice – once we define a purpose, ethical standards become clear (for example, the purpose of having a pen is to write. A ‘good’ pen writes well. A good insurer provides financial security).

Figure 1 shows the role of the virtues in an organisation, where self-control (perhaps best translated as compliance) and courage are necessary internal organising principles – not least for risk management. The consequences of an absence of courage may be illustrated by a comment made in July 2007 by Citibank’s then CEO Chuck Prince, just before the global final crisis reduced the financial institution’s value by more than 90%: “As long as the music is playing, you’ve got to get up and dance. We’re still dancing.” Too few people spoke up against the widespread recklessness of the time, and too few organisations refused to join the crowd. 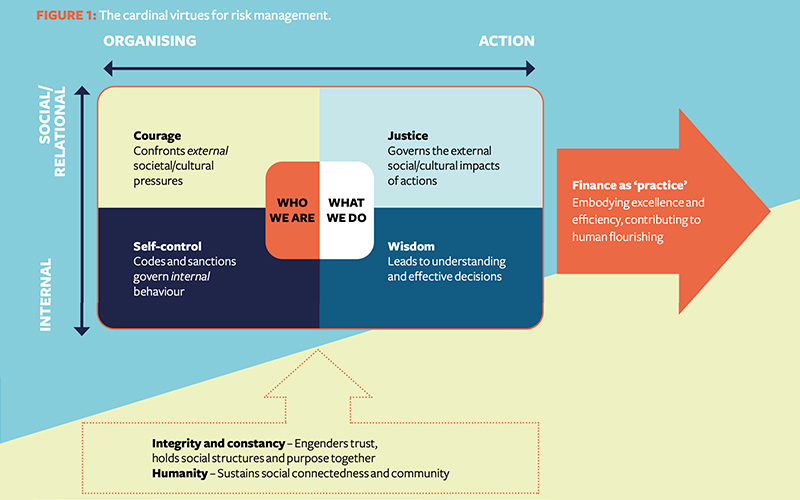 Recognising the role of courage means recognising that we cannot rely on rules, structures and incentives for people to do the right thing, and acknowledging that aspirations to virtue are almost, but not quite, universal.

To collaborate fruitfully, we must encourage the virtues in ourselves and those with whom we work, and take a stand when our personal or mutual interests are threatened by greed. Greed is wanting more than our fair share; justice is its opposite.

“We must encourage the virtues, and take a stand when our personal or mutual interests are threatened by greed”

A failure of regulation

Neither the FSB nor the FCA call for courage. In the FCA’s case, the onus to behave responsibly is shifted to the regulations: tens of thousands of words, as though the regulators are better able to manage organisations than the organisations themselves. There seems to be no consideration of the need for management to define a company’s purpose in guiding the business plan and operations, so the virtues appear arbitrary (or even irrational).

In the remuneration section, the focus is on getting incentives right – as if those who set the incentives are devoid of greed themselves and will resist greed in others. There is little recognition of the complex and somewhat chaotic environment of business, in which there is seldom a linear relationship between actions and outcomes. This bedevils objective measures of performance. Additionally, the FCA regulations do not mention that excessive executive remuneration may distort power relationships and lead to hubris and recklessness. Accountability seems limited to the need to reduce remuneration if things go wrong, based on a naive, linear view of relationships. Such an approach leads to obfuscation and the hiding of errors.

This failure of regulation is puzzling in some ways, but can be explained as ‘regulatory capture’ – partly caused by lobbying from regulators and politicians, partly by the fact that the dominant paradigm seems too established to question and is relatively easy to implement. An alternative approach would mean challenging the greedy and thinking more carefully about effective regulation (is it perhaps easier to write a long regulation than a shorter one?).

Many readers will intuit the need for a different approach to the dominant paradigm, and this feeling is probably shared by most people. We must promote participatory and reflective cultures within organisations that recognise the cardinal virtues, and acknowledge that it is intellectually dishonest (in boards, remuneration committees and policy formulation) not to seriously consider alternatives to the dominant paradigm.

This article is based on Anthony Asher and Tracy Wilcox’s paper ‘Virtue and risk culture in finance’ (Journal of Business Ethics, 2021).

This article appeared in our September 2021 issue of The Actuary.
Click here to view this issue
Also filed in:
General Features
Topics:
Risk & ERM
Regulation Standards