Brian McGregor explores how insurers can increase insurance penetration in risk zones, such as the area around the Mount Nyiragongo volcano 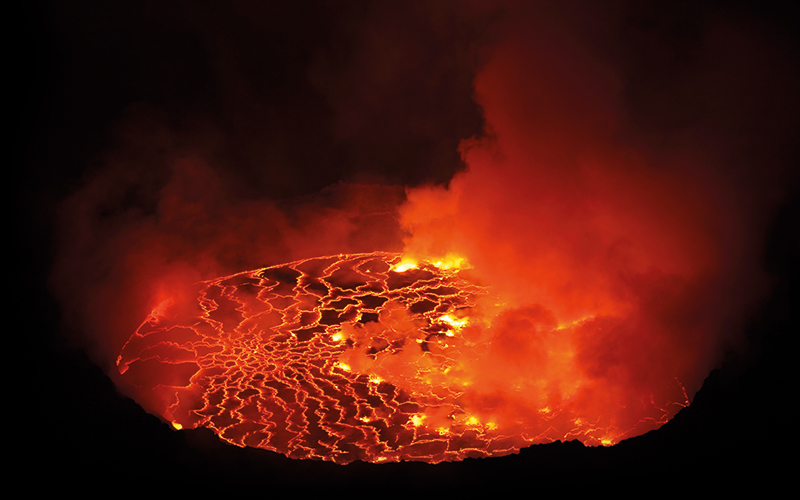 More than 1.3 million people live within 30km of Mount Nyiragongo and its lake of molten lava. The volcano is situated in the Democratic Republic of Congo (DRC), close to the Rwandan border, and its lava lake is among the biggest in the world – the volume of molten material is estimated at around 11.4m cubic metres, which is more than the water contained in 4,500 Olympic-sized swimming pools.

Mount Nyiragongo volcano is part of the East African Rift valley, which stretches from the Middle East south towards Mozambique. The valley is formed as the Nubian plate shifts away from the Somalian plate at a rate of about an inch every 10 years. As these plates move away from each other, magma from the earth’s mantle surges upwards through fissures. The magma collects in this lava lake, which forms in a funnel-like shape within the cone of the stratovolcano.

The volcano is a stratovolcano because its volcanic cone is formed of alternating layers (strata) of lava, tephra (volcanic rock fragments) and volcanic ash. Stratovolcanoes normally contain viscous lava, which flows slowly and only travels short distances, but the lava in Mount Nyiragongo is very fluid due to its low silica content. This, together with the steepness of the mountain slopes, allow the lava to run towards nearby villages and the city of Goma at up to 96km per hour. When an eruption occurs, the people of Goma have less than 10 minutes to flee before a wall of molten lava crashes into the first homes.

Mount Nyiragongo is an active volcano; at the time of writing, the last devastating eruption occurred in May of this year. In addition to the danger presented by the lava, the eruption is accompanied by earthquakes, with significant aftershocks still affecting Goma and the surrounding regions. The sudden boiling of Lake Kivu can also lead to the release of methane and other carbon-rich gases, which in turn can cause asphyxiation of humans and animals. ‘Mazuku’ – a Swahili word meaning ‘evil wind’ – is a phenomenon whereby pockets of CO2 accumulate in lethal concentrations in lowland depressions.

Since records of the volcano’s eruptions began around the 1880s, there have been 34 periods of volcanic eruptions, with some lasting for years. Goma was seriously affected by lava flows in 1977, 2002 and now 2021; in 2002, nearly 20% of the city was destroyed by molten rock, including its airport. According to a BBC case study, 12,500 homes were destroyed and 400,000 people required evacuation. Travel links such as roads, seaports and airports were badly damaged. In addition to the physical damage to property and direct loss of life, diseases such as cholera caused a wave of secondary deaths. Up to 14 nearby villages were destroyed.

It is estimated that up to 80% of the regional economy was paralysed in the aftermath of the 2002 eruption. In an already vulnerable population, unemployment rose from 80% to 95%, with those who were employed suffering wage decreases that compounded the suffering.

It is difficult to understand how and why a city as large as Goma was formed so close to such a deadly volcano. While there may be an under-appreciation of the risks on the part of the local population, the frequency and severity of the volcanic events make this unlikely. A survey conducted in 2002 by aid agency International Rescue Committee found that there was widespread reluctance to move away from the volcano, with more than 40% of residents preferring to remain in their homes; only 8% expressed a desire to live somewhere else. Interviews with people living in other disaster areas around the world found that ancestral reasons are the most common factors binding a person to a place.

While relocating the city would seem sensible, with only 8% of the population ready to commit to such a relocation, it is likely that Goma will remain a large city for years to come. When the next eruption strikes, it will most likely still have more than a million inhabitants.

Investment is needed in volcano flow models to identify likely flow paths and the most at-risk communities. Planning permissions for new structures should restrict building in high-risk zones, and planning regulations must include seismic shock considerations. The volcano observatory must be re-funded to provide early warnings for residents, as well as welcome employment for local scientists.

While the 2021 volcanic event is serious, initial indications suggest that it does not yet appear to have been as destructive as the 2002 eruption. The direct lava damage is less, but aftershocks have caused the collapse of some warehouses and buildings. The city has a mix of construction types, with many structures not designed or built to withstand ground movement.

The supply of insurance locally is restricted – not just for seismic events, but for other much-needed covers, too. This has been driven by large foreign reinsurers withdrawing coverage as they evaluate their exposures, and erodes trust among locals that insurance products will be there when they are most needed.

The insurance industry should be part of the solution. Volcanoes, like other natural catastrophes, can be insured. The industry does a good job globally at collecting premiums of the many to pay for the losses of the few. Coverage must be clearly defined to ensure a fair indemnity in the event of loss. As we increase the scope of coverage, the product will appeal to a broader audience of property owners and businesses.

“The supply of insurance locally is restricted, eroding trust among locals that insurance products will be there when they are needed”

According to recent data, 2018 premiums written in the DRC were US$70m, with the combined market share capital at a similar level to gross written premium in 2019. While it has been difficult to quantify the economic damage from the 2002 or 2021 eruptions, it is clear that this exposure is beyond the capabilities of the local insurance market.

The best way to increase the premium pool is to improve insurance penetration. The first step towards this goal was achieved in 2019, when the local regulator started to liberalise the insurance market and issued new licenses to three insurance companies. This was followed in 2020 by additional licenses, bringing the total number of insurers in the DRC to seven.

Increased choice for consumers is providing a better customer experience, and more competition among insurers will both improve the quality of the product and make it more affordable. Large industrial companies will be more inclined to keep their insurances onshore as their confidence in local markets strengthens.

International reinsurers can further improve confidence by increasing the local market’s capacity to absorb risk, using treaty products to protect their performance, liquidity and solvency capital. Facultative reinsurance can be used to blunt peak individual risks that would otherwise unbalance a portfolio. Risk sharing and knowledge sharing go hand in hand, and provide equal benefits to both local and foreign (re)insurers.

Ultimately, the costs of responding to disasters such as volcanic eruptions will shift from government and international donors to professional insurance and reinsurance companies that are skilled at injecting indemnity and hope into communities after disaster. Helping people cope with grave events is the core business of insurers. Keeping this promise post-event for volcanoes and other regional disasters will make our product more desirable, and improve insurance penetration in Africa.

The author would like to thank Rupert Weterings, director of business development at Olea Insurance Solutions, and Will Capel, global FAC, GB head of Rest of World at Willis Towers Watson, for the insights shared from their time living and working in the DRC.

Brian McGregor is head of property at Africa Specialty Risks

This article appeared in our September 2021 issue of The Actuary.
Click here to view this issue
Also filed in:
General Features
Topics:
Environment
General Insurance
Global