Jennifer Dixon: work to be done

Jennifer Dixon speaks to Stephen Hyams about the impact of the COVID-19 pandemic on the UK’s health, the lessons we must learn, and how data and technology could help relieve pressure on the NHS 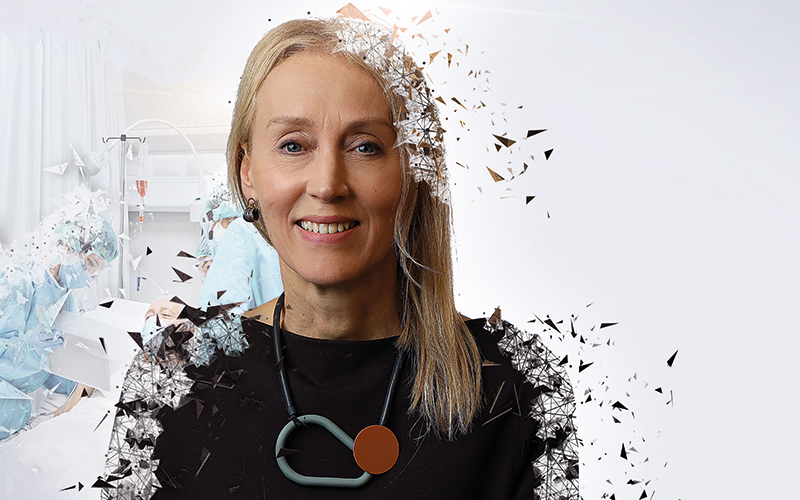 Jennifer Dixon CBE, chief executive of the Health Foundation, is committed to improving the health of people in the UK. Asked about our relatively high COVID-19 death rate, she points to a longer-term trend: “We had a weaker, less-resilient health stock. Michael Marmot’s 2020 review blamed austerity, which pulled the rug out from under social protection. Others, such as Angus Deaton and Anne Case, point to 40-year structural economic changes that have crushed some communities, such as the decline of big industry.” The gaps between rich and poor in terms of both life expectancy and healthy life expectancy have grown, and the pandemic has exacerbated these health inequalities by disproportionately impacting those in weaker health.

While a slowdown in mortality improvement rates over the period 2011-20 was experienced by all countries in the Organisation for Economic Co-operation and Development (OECD), “recent analysis shows that those countries with a lower slowdown fared relatively well in terms of COVID-19 deaths,” says Dixon. In that context, it is no surprise that the UK had one of the most pronounced slowdowns in mortality improvements during that period. 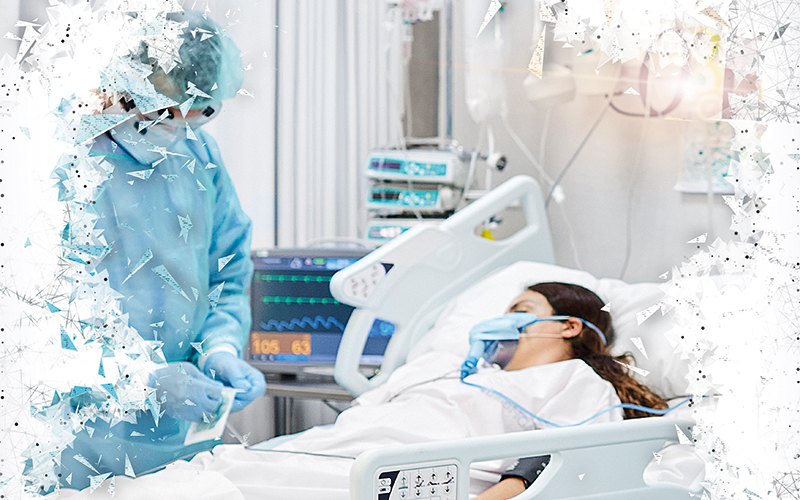 “You need an underlying theory of what causes health to deteriorate over time,” Dixon explains. “The wider determinants of health, such as the environment and education, are far more important than healthcare, for example.” We need to tackle these root causes if we are to make real improvements in the nation’s health. “This can help address specific risk factors, such as obesity, alcohol, smoking and drugs, which are socially patterned.”

What is the impact of long COVID? “Our understanding is still emerging,” she says. “It is characterised by symptoms extending beyond four weeks after initial infection, and can last for more than eight months. It has affected over one million people, or 20% of those who tested positive for COVID-19, and two-thirds of them say it restricts their daily lives.

“The condition has two broad sources. COVID-19 is a vascular disease, as well as respiratory, and can cause micro-blood clots, leading to lasting targeted organ damage, or fluctuating multi-system symptoms relating to different organ types. Secondly, the body’s immune system can fail to switch off, resulting in general malaise and fatigue, and post-viral symptoms, which can affect children.”

Long COVID-19 tends to affect women more than men, the middle-aged more than older people, those who have been hospitalised or with pre-existing medical conditions, and groups with higher exposure to COVID-19. “It can affect people who initially have only mild symptoms. As with long Ebola, we don’t know whether the virus hides somewhere latent before re-emerging. It’s going to affect the working-age population for sure, and for those exposed through work there is a push for it to be recognised as an occupational disease.”

Mental health issues in younger people are a longstanding concern, but have been made worse by the pandemic. “We know what is associated with poor mental health: stress from early life experiences, precarious and low-quality work, poor education, low expectations – all impacting the resilience to cope with life,” says Dixon. “It is hugely important, as young people are our future asset. We need there to be access to college places and apprenticeships, housing and transport subsidies, and greater protection for those on low pay. They also need access to mental health services.”

Another big area is education and catch-up. “Before the pandemic, there were increasing levels of depression and anxiety, particularly in girls around 16-18 and partly attributable to social media,” Dixon explains. “Home learning during the pandemic has been helpful to some, but for many it has caused additional stress due to challenging family circumstances.”

Investing in the future

What lessons can we learn from the pandemic? “The need to improve the health fabric of the nation and our underlying resilience to an emergency,” says Dixon. “The other factor is the resilience of the health and social care system. We know about chronic underfunding in hospital beds, doctors, nurses and equipment when compared with the rest of the OECD.”

With fiscal activism in vogue, there is no shortage of money available to spend, but Dixon is concerned about cognitive bias in current UK government decision-making. “The money available as part of the levelling up agenda is largely focused on infrastructure projects such as bridges and trains, which are easier to visualise.

We have a blind spot for talking about spending on human capital, such as health and education, and social capital, which includes the cohesion and vibrancy of communities.”

“We do a respectable amount of horizon scanning and planning in the UK for emergencies,” says Dixon. “However, it doesn’t translate into serious decision-making, which I think is because the government of the day is preoccupied with the short-term.”

Our focus on planning for a flu pandemic was another problem. “The fear factor was not high enough. Some Asian countries were on high alert; they’d seen coronavirus before.” This reflects a lack of political leadership in identifying the key issues and channelling resources appropriately, she believes.

Dixon suggests the decision-making process during the pandemic could have been better. “Governments have to make very difficult decisions, taking into account a number of factors. The science community did well and worked closely with the prime minister, but you also need something like a chief economic and chief social officer, akin to the chief medical officer, to provide key information.”

Cognitive bias in positions of leadership is another concern.

“Even with better information, one person’s perspective is just not enough. How do you ensure that the key decision-makers take account of all the key information in order to make rounded decisions with full transparency, and that the prime minister, for example, receives adequate challenge?”

Technology has played a key role during the pandemic. “There’s been a large increase in the use of existing technology in healthcare, in particular for virtual consultations and using social media to reach consensus decisions about emergency treatment. There’s also been an enormous shift to online and digital forms of care, which weren’t there before.”

Last October the Health Foundation conducted a survey of 4,000 patients and 1,000 NHS staff, which demonstrated widespread support for the use of technology. “Staff appreciate how it has relieved the pressure on them during the pandemic. Given the speed of take-up, there is still plenty of evaluation needed on safety and effectiveness, though.”

Technology is not for everyone: for example, virtual consultations work well for simple, transactional matters, less so for those with multiple, complex conditions. They are also less popular with older people and those from more deprived communities.

Dixon would like to see the NHS do more to embrace technology in the future. “It has great potential to enhance productivity, which is crucial with the fiscal pressures on resources.” It is important to evaluate the impact of technology, which is facilitated by the increasing amount of data available. “We should exploit far more the huge volume of NHS personal-level real-time data. There are huge benefits in pooling these large datasets, just like Amazon and Google do.” Ensuring the security and confidentiality of personal data is, of course, key.

One concern is bias in the way data is collected, with under-representation of some ethnic groups undermining its reliability and usefulness. Recording ethnicity when collecting data can help identify such problems.

The Office for National Statistics has issued an experimental Health Index – “a composite index of health and wellbeing in each local authority area, which is not just a measure of current health but also of how that might develop in the future”, as Dixon explains.It comprises 58 indicators, which are organised into three groups. ‘Healthy people’ covers mortality rates, the prevalence of diseases and illnesses, and the degree of happiness and wellbeing. ‘Healthy lives’ concerns factors such as unemployment, child poverty and the prevalence of smoking, obesity and so on. ‘Healthy places’ addresses the wider determinants of health, such as green spaces, housing, access to healthcare and crime levels.

Looking ahead, Dixon is optimistic about the wealth of talent in the health and public arena. “I think there’s a positive culture of transparency for debate, and a balance towards people wanting to close the health gap between rich and poor across the country.” She is also positive about the potential for data to improve healthcare, and the ongoing role of the NHS in providing equitable access at the point of need.

She is concerned about the government’s apparent bias against acting on the wider determinants of health and its failure to tackle social care, which would help older people to remain independent and thrive for longer. “I also worry about a possible fiscal squeeze in the next couple of years, which could impact the NHS.”

The main issue at present is recovery from the pandemic.

Dixon sees two positive signs: “The public consciousness has been aroused to improve the health of the nation, especially closing the gap between the rich and poor. There is also optimism that the state can be used for the public good, in a way we haven’t seen for a long time.” 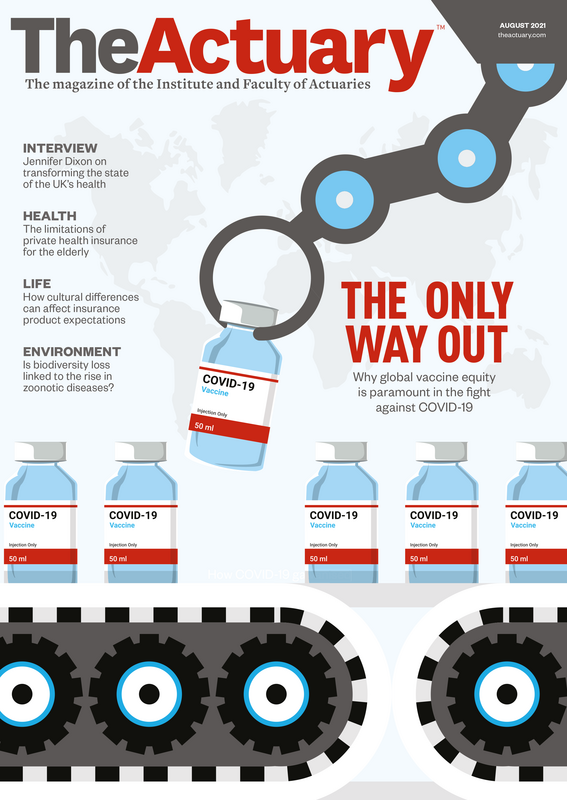 This article appeared in our August 2021 issue of The Actuary.
Click here to view this issue
Also filed in
Interviews
General Features