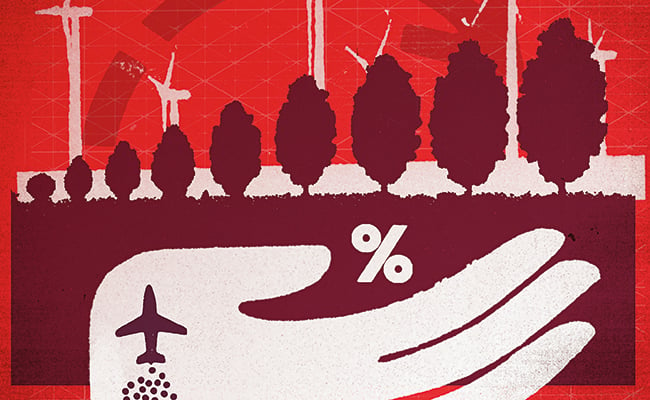 Although the pandemic has our immediate attention, we must not lose sight of the fact that carbon dioxide concentrations in the atmosphere continue to rise. When we consider climate change, only one thing is certain – the consequences will be with us for many generations to come, impacting the long-term financial future at the core of actuarial science. How do we build such uncertainty into our modelling and client advice?

Large UK pension schemes will soon be required to disclose their approach to managing climate-related risks and opportunities, with a specific requirement for climate-related scenario analysis. In 2023, the government will review whether this should be extended to smaller schemes. In the face of considerable uncertainty, scenario analysis is likely to be the best way for pensions actuaries to explain the systemic risks of climate change to trustees and sponsors.

The IFoA and Ortec Finance have produced a case study (bit.ly/3aRg9D0) illustrating what climate scenario analysis might look like for a typical UK pension scheme. (Note: Although the modelling reflects a pre-pandemic world, allowing for more recent conditions would not materially alter the conclusions.) Using Cambridge Econometrics’ macro-econometric model (E3ME) and Ortec Finance’s ClimateMAPS modelling tool, the process starts with three possible climate pathways, as set out in Figure 1. The target under the Paris Agreement is to restrict global temperatures to well below 2°C above pre-industrial levels. The three pathways revolve around that target – described as an Orderly Transition, a Disorderly Transition and Failed Transition.

Climate-aware modelling techniques are used to integrate climate science, macro-economic and financial modelling to paint a picture of the development of the economy under the three scenarios. The outputs can be plugged into pension scheme funding models so that funding risks can be explained and managed. Importantly, the latest climate science is factored in, leaving actuaries to reserve their judgment for the financial implications.

From a macro-economic perspective, the transition and physical impacts play out through projections of economic variables relative to a ‘climate-uninformed’ baseline. For example, the impact on future equity returns is illustrated in Figure 2.

This shows that, in Paris-aligned pathways, the annualised decline in equity returns is expected to be material but moderate, with cumulative returns being 15% and 25% lower by 2060 (equating to 0.4% per annum and 0.7% per annum) respectively. In the Failed Transition pathway, there is a significant 50% decline by 2060.

The modelling is designed to enable significant granular analysis, from the contribution of physical, extreme weather, transition and pricing shock effects to the impact on expected yields and returns of specific asset classes, as well as other economic variables such as inflation. Its systemic top-down approach allows consistent modelling of the impacts on assets and liabilities.

The case study considers a closed UK defined benefit pension scheme, with a 50% growth-50% bond asset split and around 50% of the liabilities hedged against interest rate and inflation risk. It is currently 75% funded and has a funding plan projected to achieve 100% funding in 10 years’ time in the median baseline case.

The funding position of the scheme can be projected forwards using the various transition pathways, as illustrated in Figure 4. This chart assumes that trustees change their investment strategy in 2030, ‘de-risking’ gradually to 100% bonds and 100% hedging by 2040. The funding projections are worse in all three climate scenarios, implying that the median (climate-uninformed) baseline is too optimistic and underestimates the funding risks. Furthermore, the funding objective is met much later in the Paris Disorderly Transition pathway than in the other pathways. The probability that the pension scheme will be fully funded on this basis at the originally expected date of 2030 is less than 50% unless additional deficit contributions are paid.

The differences in funding level development between the three pathways are mainly due to differences in investment returns up to 2030, after which the exposure to growth assets decreases. However:

This type of modelling helps trustees and sponsors to understand how climate-related risks might unfold, and to identify mitigating actions they could take. For example, they might explore alternative asset allocations, alter the prudence margin in their funding basis, or incorporate climate-related triggers into their contingency plans.

Climate-economy modelling tools are widespread and should be an invaluable tool in the pensions actuary’s armoury. As with all long-term projection modelling, it is important to recognise that there will be limitations. In the ClimateMAPS tool, as in most tools of this type, the implications of climate change on biodiversity loss, mass migration, food shortages and conflicts are not considered. Neither are the non-linearities associated with the tipping-point effects expected if temperatures continue to rise. It is therefore important to consider the relative, rather than absolute, outcomes, recognising that future pathways are a function of the policy choices of national governments, technological developments and societal behaviour, and that political factors will be dominant in determining which pathway is taken.

The rise of the climate-aware actuary

As the profession looks towards the future, it now recognises the significant role of actuaries in modelling the impact of climate risks in financial matters. A core goal for the IFoA should be that “climate related risk is understood and considered by our members in the same way as other major risks such as interest rate risk and mortality risk”, as the report Climate related risk at the IFoA (bit.ly/3byKZkv) puts it. We use the phrase ‘climate-related risk’ here, but there is an opportunity for actuaries to become more involved in climate-aware financial modelling. Indeed, given the financially material nature of climate change and the increasing expectation that scenario analysis should be used to understand its impacts, it is clear that actuaries have an important role to play in developing and using the type of modelling illustrated here. We encourage you to investigate the tools available, and even to consider developing tools of your own.

This article appeared in our June 2021 issue of The Actuary.
Click here to view this issue
Filed in:
General Features
Topics:
Risk & ERM
Pensions
Environment