Act natural: how the economy and biodiversity loss can impact actuarial work

Aled Jones and Lucy Saye discuss the link between the economy and the environment, and how biodiversity destruction and loss could impact on the work of actuaries 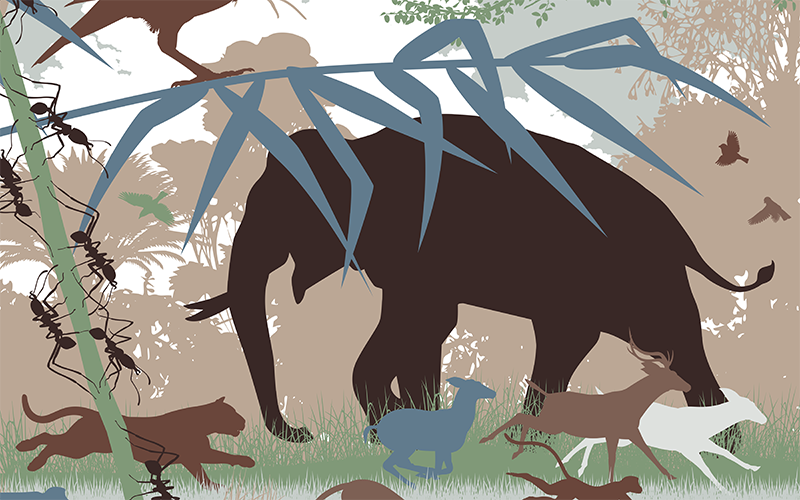 Biodiversity underpins our economic success in numerous ways. It provides inputs for new medicines and multiple services such as pollination, erosion control, food supply and clean air. The disruption or loss of any of these services represents a significant financial risk. The World Wildlife Fund’s (WWF) Global Futures report, for example, estimates a loss of US$10trn in global GDP between 2011 and 2050 if current biodiversity loss trends continue. Actuaries should consider how these risks could impact their work and advice.

The link between the economy and the environment

In 2009, a group of scientists led by Johan Rockström identified nine core processes upon which humanity depends and defined the ecological limits for each, calling them ‘planetary boundaries’. Four of these processes – climate change, biodiversity loss, nitrogen and phosphorus cycles, and land use – have been pushed beyond their boundaries by human activity, increasing their risk of collapse.

Kate Raworth’s ‘Doughnut Economics’ model (Figure 1) recognises the link between the economy and the natural environment by incorporating the planetary boundaries as the outer ring of the ‘doughnut’. The inner ring is based on achieving the social components of the UN’s Sustainable Development Goals (SDGs), and the middle represents the space in which humanity can thrive.

This concept that the economy is inextricably linked with and dependent upon biodiversity was also highlighted in the Dasgupta Review (bit.ly/31Sw0wp), published by the Treasury in early 2021, as well as in the article ‘Vanishing Wilderness’ in the March edition of The Actuary (bit.ly/3rpgKBw). Positioning environmental concerns as a trade-off with the economy is a false dichotomy. However, the Dasgupta Review confirmed that many ecosystem services come with a negative price tag, so that it pays to exploit the biosphere. This effect is amplified by governments through perverse subsidies.

Despite its importance, biodiversity presents a challenge for economic assessments – the benefits associated with biodiversity are often not directly attributed to private profit generation, and traditional economic models fail to incorporate benefits that cannot be captured by the market. Furthermore, it is often not possible (or even desirable) to put a price on such benefits. This means we risk underestimating both the benefits to society afforded by biodiversity, and the costs of biodiversity loss.

The link between financial services and the environment

The financial services industry holds a unique position within the economy. It is widely recognised that the financial system faces systemic risks from environmental issues such as climate change and biodiversity loss (outside-in risks); however, the financial system itself facilitates business activity that poses risks to the natural environment (inside-out risks). Bank lending, debt financing and investment activity determines capital allocation across economic sectors, and insurance underwriting ensures that economic activity can take place by providing necessary security.

Large, diversified, long-term institutional investors, such as pension funds and life insurers, are unable to avoid systemic risks like climate change and biodiversity loss because they own a representative slice of the market (the universal owner hypothesis). Put simply, such institutions cannot stock pick their way out of the long-term systemic risks posed by biodiversity loss, as externalities from off ending sectors are borne across enough of the market that any diversified portfolio will be exposed to those risks. Universal owners therefore have an incentive to actively facilitate the transition to a sustainable economy while positioning themselves to benefit from any upside opportunities.

There is the added issue of liability risks – losses arising from people or businesses seeking compensation from those they hold responsible for losses they have suffered. It is recognised that in the context of climate change, liability risks may be transferred to insurers from products such as directors’ and officers’ insurance and professional indemnity insurance. Such risks also apply to biodiversity loss. Even if these risks are not collectively underwritten by the insurance industry and remain with the primary sectors, any reduced returns that result when such losses materialise are still borne across the economy as a whole.

With biodiversity loss at a global scale and ongoing pressure on land and ocean systems likely leading to further and significant loss, some impacts are already locked in and substantial future risks are likely. So how should insurers, banks, pension funds and regulators approach biodiversity risks? In ‘Universal Ownership in Practice: A Practical Positive Investment Framework for Asset Owners’ (bit.ly/3dtLMnV), Ellen Quigley discusses the ways in which current responsible investment practices are insufficient to mitigate systemic risks such as biodiversity loss, and a report by Portfolio Earth highlighted how the world’s largest banks lent US$2.6trn in 2019 to sectors identified as primary drivers of biodiversity destruction. None of the banks assessed had comprehensive policies in place to monitor, measure or halt these impacts. Set in the context of a collective failure to meet a single 2020 Aichi Biodiversity Target, this suggests that current practices have not yet translated into real-world positive effects at the scale needed.

Additionally, nature-related risks are characterised by path dependence, optionality or irreversibility, systems effects, feedback loops and radical uncertainty, meaning financial markets are not capable of sufficiently internalising these risks into prices. These characteristics pose challenges for financial modelling and quantitative assessments, and may need to be supplemented with alternative qualitative approaches to inform decisions. Risk management should recognise inside-out risks and systems effects, and prioritise action to actively avoid catastrophic tipping points and build resilience.

Financial regulators and governments should adopt policies that steer the market towards sustainable outcomes. Policies such as incorporating sustainability considerations into central bank asset purchase programmes, or prudential regulation to discourage future financing of harmful activities, could be considered. The private sector can also take this approach – exerting influence through underwriting, pricing, financing and even procurement policies.

A risk for actuaries

In its initial position paper, The Importance of Biodiversity Risks, the IFoA Biodiversity Working Party found that biodiversity represents material financial risk through both direct physical losses (for example loss of pollination) and transition risks (for example a global move away from palm oil use). The working party is made up of actuaries with expertise across the finance sector, and each found areas where this risk would be present in their advice and work. It has published four further papers, which include a number of case studies and explore particular aspects of biodiversity loss and its potential impact on actuarial practice.

The concept of natural capital, the focus of the first paper, has been championed by the UK government and various business groups. However, it has also been seen as controversial within some non-governmental organisations. While natural capital can allow for biodiversity monitoring and provides a common language for decision-making, it can lead to unintended consequences – including the potential worsening of biodiversity outcomes.

Defra’s Enabling a Natural Capital Approach (ENCA) guidance provides a list of data items and tools that can be used. Many such approaches now exist or are being developed, and the use of quantified metrics to assess biodiversity impacts and benefits is the subject of the working party’s second paper.

The Dasgupta Review suggests that biodiversity loss increases contact between people and wildlife that carries zoonotic pathogens – leading to spill-over infections, where pathogens are transmitted from animals to human hosts. This is the subject of the working party’s third paper. COVID-19 has emphasised the significant risk that zoonotic pathogens can pose to finance and the global economy.

The working party’s fourth paper focuses on the issue of justice within the context of biodiversity. Shareholders, policyholders, sponsors, scheme members, local and indigenous communities, and nature itself must be considered in any evaluation. The issue of intergenerational fairness also needs to be taken into account. The efforts to quantify nature are subjective, land ownership is often contested, and it may not even be clear who all the stakeholders impacted by a project might be. Actuaries, who are independent and adopt a concept of fairness, will need to consider as wide a range of stakeholders as possible, embrace uncertainty, and use qualitative measures to ensure the best possible advice can be given.

An opportunity for actuaries

By focusing on the economics of biodiversity, the Dasgupta Review highlights a number of factors that will become increasingly important during the next few years and potentially offers an opportunity for actuaries to use their skillset more widely.

The review recommends that natural capital is embedded in national accounting systems, including GDP. Several other recommendations will have a direct impact on actuaries, such as increasing investment into protected areas, including natural capital in government stimulus packages, creating new financial systems to pay for ecosystem services, border adjustment taxes, environmental taxes, increased disclosure, and the creation of a global insurance risk pool for environmental disasters.

The review does have shortcomings, such as its narrow focus on bringing nature into economics. Actuaries have long argued that issues such as climate change require a different approach to management – not just pulling nature into existing economic theory and financial practice (see the Actuaries for Transformational Change as a recent example).

Actuaries are well placed to advocate for the development of effective policy frameworks and methods for managing biodiversity risk. Our central understanding of long-term financial risks, the limitations of models, and the need to balance outcomes between different stakeholder groups, will be vital in helping us ensure biodiversity is better protected in future.

This article appeared in our May 2021 issue of The Actuary.
Click here to view this issue
Also filed in
General Features
Topics
Environment