Cassandra Coburn talks to Travis Elsum about healthy longevity, diet and sustainability, and how they are connected 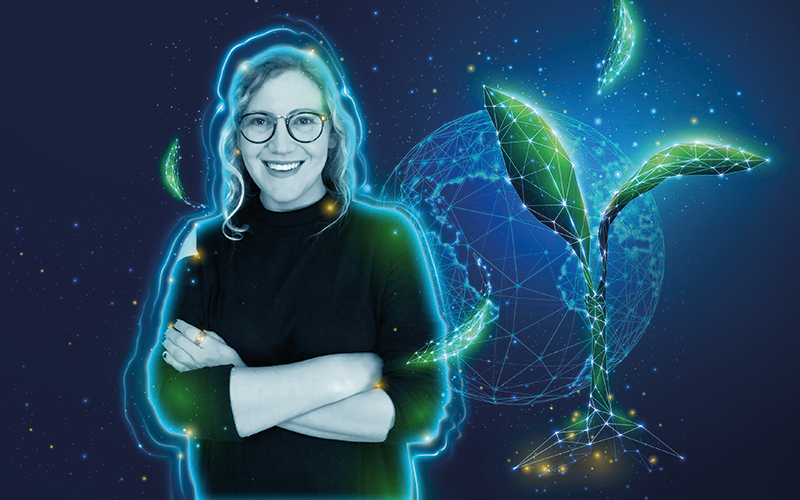 Dr Cassandra Coburn describes her career journey as a series of fortunate coincidences. But whether by happenstance or by design, an interest in healthy longevity, a love of writing and a desire to make a diff erence shine clearly throughout her career history. After obtaining a PhD in genetics from the Institute of Healthy Ageing at University College London, Coburn became a senior editor at The Lancet Oncology and was later promoted to deputy editor.

In 2018, Coburn left The Lancet to write a popular science book, Enough, and work as a freelancer. Just as she was starting to question whether freelancing was her true calling, a perfect opportunity arose for her to utilise her PhD and work in an area of interest. She grabbed it and in 2020 was welcomed back to The Lancet family as the founding editor-in-chief of The Lancet Healthy Longevity.

The Lancet Healthy Longevity focuses on longevity and healthy ageing research. “People are living longer than ever before, which is worth celebrating,” says Coburn. However, she adds, lifespan is not the only measure of success. “One of the things that we really wanted to explore is: how can we ensure that people have healthy longer lives, as opposed to seeing population health falling off a cliff at some point?”

Healthy life expectancy refers to the average number of years an individual can expect to live in good health. Despite its importance, there is insufficient research, focus and investment in this area. Coburn cites the Ageing: Science, Technology and Healthy Living report (bit.ly/3fc4TEo) published in January 2021 by the House of Lords’ Science and Technology Select Committee, which found that “people are living longer, but many of those extra years are spent in poor health.” The report also identified stark inequalities in healthy longevity, weaknesses in the aged care system, and a general lack of planning and investment.

Coburn thinks that part of the problem is people’s inability to imagine themselves in their old age – a problem that is all too familiar to actuaries. “We see the idea of old age homes and poor care and so on as something that happens to other people in other futures,” she says. “That needs to change, because no one wants to live in those places.”

She is, however, optimistic about the role of science and education in improving healthy longevity. “We can take ownership of our own lives to ensure that we have a large portion of time thriving rather than worrying about our health.”

“The Lancet is first and foremost a clinical group of journals, so the primary readership is clinicians and the ultimate aim is to inform medical practice,” Coburn explains, when asked about the journal’s accessibility. “However, the journal also covers areas that have broader appeal and may be of interest to actuaries, such as discussions on policy and socioeconomic factors.”

Coburn recognises actuaries’ expertise in longevity and their contribution to research. She would like to see more actuarial work in the public domain and greater involvement in multidisciplinary projects. “Perhaps more shouting is needed, because actuaries should be informing policy and driving it forward, particularly in terms of what needs to be provided in future,” she says. Here she echoes a theme of Tan Suee Chieh’s IFoA presidency – the need for greater thought leadership. Actuaries can make a range of important public contributions, such as highlighting socio-economic inequalities in life expectancy, projecting required investment in the health and care systems, helping policymakers understand implications of ageing projections, and informing the debate on the retirement age.

“None of us are going to have particularly healthy, happy lives if the environment is slowly disintegrating around us”

A diet for the planet

Coburn’s book, Enough, is based on the Planetary Health Diet (PHD), which is a research collaboration between The Lancet and the Swedish non-profit group EAT foundation. “I wanted to take the research, which is so important, and make it more accessible,” says Coburn.

Coburn was drawn to the sustainability aspects of the PHD partly due to her love of wildlife – fostered during her nature-filled South African childhood – but also for the link with healthy longevity. “None of us are going to have particularly healthy, happy lives if the environment is slowly disintegrating around us,” she points out.

Our food production systems are the single biggest driver of environmental change. “This is not the same thing as climate change. Food production influences multiple different elements of the world, called planetary boundaries,” says Coburn, referring to the environmental limits defined in 2009 by a research team led by Johan Rockström. “Everyone has heard of one, which is climate change. Unfortunately, that is not the only change we are wreaking on the planet.” Others include biodiversity loss, changes in land use, freshwater use, and nitrogen and phosphorous flows.

Diet is also a major driver of non-communicable diseases, so it is a key element in unlocking improvements in healthy longevity. Enough seeks to tackle these interconnected challenges. “In the book, I take a planetary boundary and I take a food group and explain how they interact.”

“Without question, poorer dietary choices are driving poorer life expectancy,” Coburn says. “The danger is abundantly clear.” For example, ultra-processed foods – whose ingredients undergo many processes during their extraction and combination – are linked to a rising incidence of obesity and other non-communicable diseases.

Diet is also a contributor to inequality in healthy longevity between socio-economic groups. Enough describes the concept of ‘food deserts’, which are typically poorer areas where residents have limited access to affordable and nutritious food, meaning it is often cheaper and easier for them to eat badly.

Coburn acknowledges that there are barriers to healthy eating, and suggests that changes in rules, regulations, taxes and subsidies could help shift the balance. However, she also notes that there are misconceptions that healthy eating is unaffordable. “It is not all about quinoa salads with mint and pomegranate. Actually, what I’m talking about is rice and beans. That’s completely healthy, accessible and delicious.”

The impact of meat

The PHD recommends we all reduce the amount of meat we eat. “We all eat a lot more meat than we need to,” Coburn points out. “We can significantly cut our consumption and still get the nutrients we need.”

Meat has a disproportionate environmental impact. “Everyone worries about food miles, but transport accounts for just 6% of greenhouse gas emissions associated with food production, whereas meat production accounts for 52%,” Coburn says. “Livestock is also a major driver of land-use change, which in turn drives biodiversity loss and affects other planetary boundaries. To produce 1kg of beef protein, it takes 1,640m2 of land – compared to 20m2 for soybeans, the main constituent of tofu.”

In terms of health effects, Enough explains that the International Agency for Research on Cancer (IARC) has classified processed meat as Category 1 – meaning it is carcinogenic to humans – and red meat as Category 2A (probably carcinogenic). However, Coburn stresses, “it is not that meat per se is that damaging – if you eat a steak, it is not like ingesting poison. It is just that the sheer quantity of meat that we eat now seems to be having negative effects.”

Coburn would love to see adoption of the PHD become widespread, but recognises the immense challenges of population-scale behavioural change and overcoming resistance from groups with vested interests.

She emphasises the importance of assisting, rather than blaming, affected stakeholders such as farmers. Rather, she suggests a gradual and considered approach, recalling a fitting quote from Christina Figueres, former executive secretary of the United Nations Framework Convention on Climate Change: “This is a transition. Let us be patient and impatient with ourselves.”

This article appeared in our May 2021 issue of The Actuary.
Click here to view this issue
Filed in:
Interviews
Also filed in:
General Features