Gordon Woo considers the effects of ecological change on pandemic risk, and when it is likely we will face an even worse pandemic than COVID-19 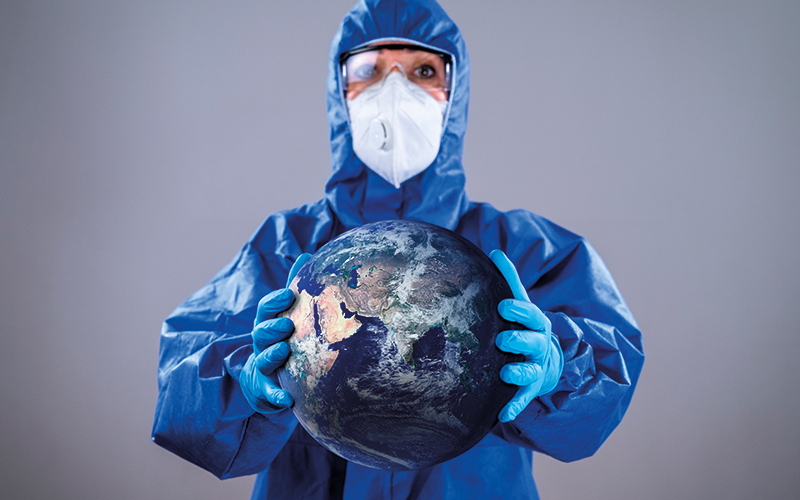 Ecology is the study of how living things interact with their environment. The ecological context of the COVID-19 pandemic is the environmental harm caused by human encroachment on wildlife habitats, deforestation and intensive animal farming.

Global changes in the mode and intensity of land use are expanding the interfaces between people, livestock and wildlife reservoirs of disease. Large-scale change in land use, such as deforestation and land conversion for agriculture, can alter the relationships between pathogen and host. A prime example is the bat-borne Ebola outbreak that emerged in December 2013 in a region of Guinea bordering Sierra Leone and Liberia, which had witnessed extreme deforestation in recent decades.

Since 1989, the world’s population has increased by 50%. The growth in the global human population is driving both climate and ecological change; more than half of Earth’s habitable land has been altered to meet the needs of its increasing population. Apart from being part of the infection transmission chain, each person is a potential live mixing vessel for viruses, as well as a host for dangerous variants – as happened with the SARS-CoV-2 Kent variant in late 2020.

“In the first two decades of the 21st century, there were as many as five near-miss pandemics, each linked with progressive ecological change”

Yunnan province in southwest China, bordering Myanmar, Laos and Vietnam, is one of the most biodiverse regions of the world. It is the southwestern hub of China’s Belt and Road Initiative, which promises substantial regional GDP growth, and from 1958-2010 its population increased from 19 million to 46 million. In 1994, there were half a million foreign tourists in Yunnan; by 2019, there were seven million.

The ecological price for this gateway to south Asia is pressure on regional biodiversity conservation, and further human encroachment into remote rural areas where there are large bat colonies, harbouring numerous SARS-like coronaviruses. A high-speed rail link connecting Kunming with Wuhan began operating in January 2017, further eroding the isolation of Yunnan’s bat caves.

Pandemic hazard in China has risen since the 1980s as a result of much-needed national economic reforms to alleviate rural poverty. Just 40 years ago, 90% of China’s population lived in abject poverty. Lacking investment for farm machinery, farmers were encouraged to collect wild animals and breed them for home consumption and sale in wet markets. The emergence of SARS in 2003, and now SARS-CoV-2, are an indirect consequence of the boom in China’s wildlife economy. Furthermore, private ownership was encouraged by the Chinese government in the 1980s, meaning ducks and geese were commonly kept in rice-growing areas of southeast China. These have been the source of dangerous avian influenza viruses.

The return period for ‘the big one’ might be estimated historically as being many hundreds of years. However, the ecological change of the past 50 years has shortened the return period. To estimate the current return period of ‘the big one’, we should recognise that in the first two decades of the 21st century, there were as many as five near-miss pandemics, each linked with progressive ecological change. These were coronavirus SARS (2003); avian influenza H5N1 (2004); coronavirus MERS (2012); avian influenza H7N9 (2013); and filovirus Ebola (2014). The case fatality rates for these were 10%, 60%, 35%, 30% and 40% respectively (Figure 1).

As has been done with many other insured perils, both natural and man-made, pandemic catastrophe from 2000 to 2019 can be assessed within the conceptual framework of counterfactual risk analysis. The classic paradigm is aviation risk. Air crashes involving western airlines are very rare; the near misses provide an empirical basis for estimating crash likelihood.

Pandemic occurrence is an intrinsically stochastic process that can be analysed by considering alternative realisations of history. For the coronaviruses SARS and MERS, there might have been a more transmissible virus variant. For the influenza virus H5N1, there might have been a dangerous mixing of human and avian flu viruses. Apart from such mixing, laboratory gain-of-function research on the novel influenza virus H7N9 might have led to a potential accidental release. The exponential spread of Ebola in Liberia might have triggered civil disorder, resulting in perfect storm conditions for the loss of regional pandemic control.

A stochastic simulation of pandemic risk from 2000 to 2019 yields an aggregate chance of a  ‘big one’ pandemic in the range of 5% and 20%. Normalising to a 20-year time window, this corresponds to a return period of between 100 and 400 years for a ‘big one’ pandemic catastrophe, which covers the range of probable maximum loss assessment. The conclusion is that ecological change in recent decades has shortened the return period for a pandemic catastrophe worse than COVID-19. As with other extreme insurance perils, attention given to risk warnings, such as by the WHO, tends to be eroded by optimism bias.

Gordon Woo is a catastrophist at Risk Management Solutions

This article appeared in our April 2021 issue of The Actuary.
Click here to view this issue
Filed in
General Features
Topics
Risk & ERM
Environment