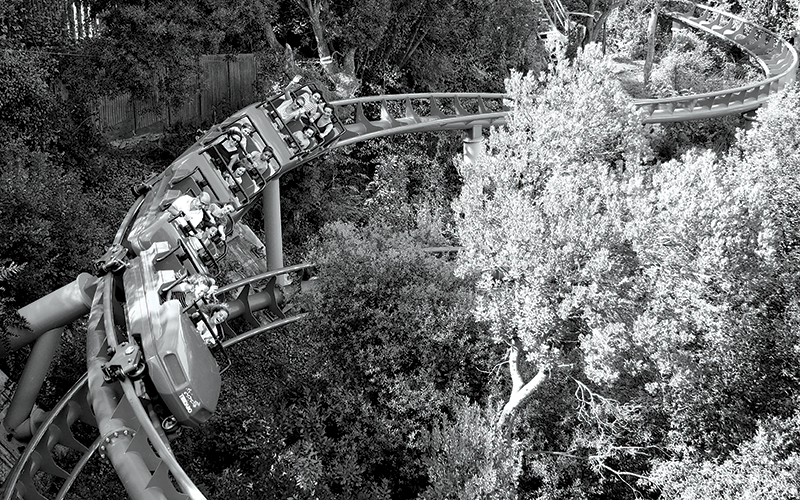 Capital allocation is an important tool for the quantitative risk management of insurers, banks or other financial institutions. In the academic literature, one solution to this problem has gained predominance: the Euler rule. In this article, I show some pitfalls of this allocation rule and introduce an alternative: the τ-risk capital allocation rule.

A financial institution needs to hold risk capital as a buffer. This serves as safety net for future shocks in the firm’s net asset value. Under Solvency II, this buffer needs to be allocated to the business units of the firm whose insurance activities generate these capital requirements. The risk capital is calculated by risk measure , often assumed to be a value at risk (VaR) or expected shortfall (see VaR and expected shortfall). 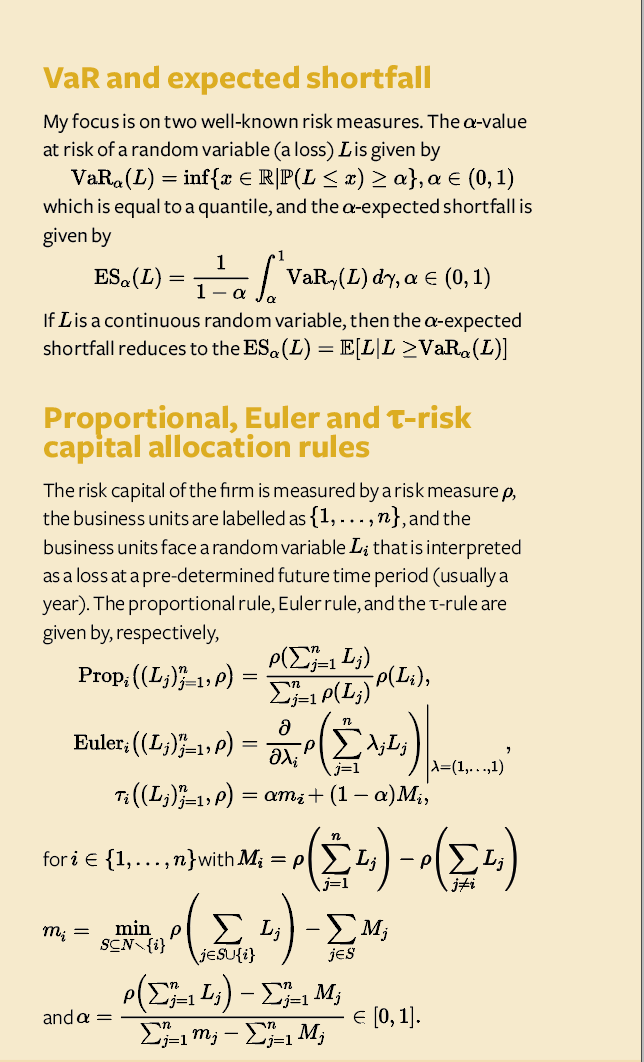 The Euler rule and its pitfall

Generally, a capital allocation should reflect the attractiveness of a risk, evaluated at firm-level. This gives rise to risk capital allocation rules that consider the marginal contributions: the relative increase in risk capital if a business unit is ‘added’ to the firm. The random loss variable of a business unit is then evaluated through its diversification effect. The proportional rule does not take into account such potential for diversification, and is therefore perceived to be ad hoc. On the other hand, the Euler rule is defined via an infinitesimal contribution of a business unit’s random loss variable to the firm’s risk capital. More precisely, it is the gradient (the vector of partial derivatives) of an appropriately chosen function.

The Euler rule gained attention in academia as it satisfies some intuitive properties. For instance, a property is based on co-operative game theory and another property follows from a suitability criterion for performance measurement. Since the Euler rule is defined as a gradient, the Euler rule does not need to exist. However, for most real-life applications (eg if there is multivariate Gaussian risk), existence of the Euler rule holds. It can be shown that the Euler rule adds up to a firm’s total risk capital if the risk measure is positive homogeneous (such as the VaR or the expected shortfall). This is based on a classical theorem of Euler – the homogeneous function theorem.

Suppose that a firm uses the risk measure 99.5%-VaR, as used in Solvency II regulation for European insurers. This is equal to a quantile of the underlying loss distribution, and this quantile is calculated at the value 99.5%. This means the probability that the loss exceeds the 99.5%-VaR is equal to 0.5%. Now, assume there are three business units, and the multivariate distribution of losses is given by the multivariate Gaussian distribution with an expectation vector of zeros and a variance-covariance matrix given by

Since the ‘true’ risk distribution is never known in practice, this discontinuity yields an important warning for practitioners if they want to use the Euler rule. If the VaR is used, generating more simulations will not resolve this issue, because the Euler rule is based on a single scenario, not on an average of scenarios. To see this, the Euler can be written as 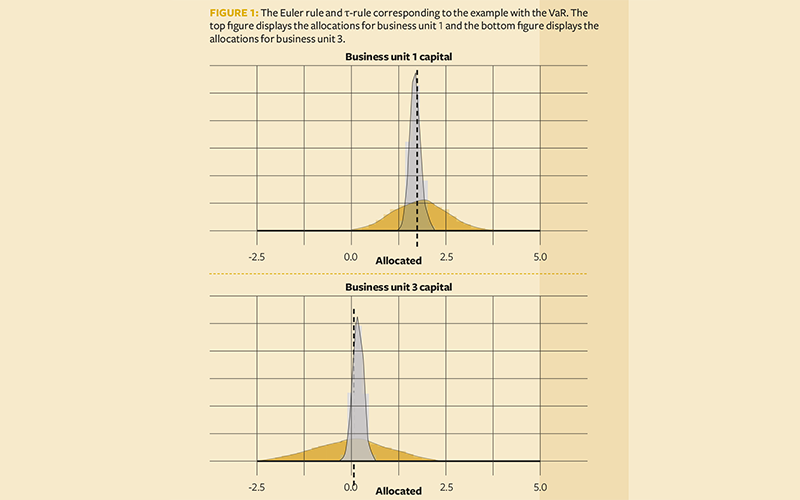 Conceptually, the idea of applying the τ-rule is to apply co-operative game theory. In this co-operative game, it is assumed that the firm’s divisions are interpreted as economic agents, each endowed with a loss random variable. The business units can co-operate with each other and form coalitions. A coalition is a subset of {1,...,n}, and can (hypothetically) act as a separate firm that does not include the other business units. In this way a co-operative game is designed, and the riskiness of a business unit is thus evaluated with respect to any coalition that can be formed.

For evaluating outside options of business units in risk capital allocation problems, a realistic instability is that a business unit prefers to become independent. In this way, I construct the utopia allocation, denoted by

. This is the best-case allocated capital that a business unit can claim, and defined by

where Lj is the random loss variable that division j is endowed with. If a business unit i claims less than the utopia allocation, it is to the advantage of the coalition N \ { i }  (all business units of the firm excluding i ) to ‘cut off’ business unit i from the firm. In this way, the allocation

can be seen as a lower bound for the allocated capital (the utopia allocation).

If p is a coherent risk measure (for instance if p is an expected shortfall), it can be shown that

Now, we can define the τ-rule, which can be seen as a ‘compromise’ between best-case (utopia) and worst-case allocations. More specifically, it is defined as the convex combination of vectors

which guarantees that the firm’s total risk capital is allocated. Every business unit is allocated a weighted average of  Mi  (best-case) and mi  (worst-case), with identical weights for each business unit. In ‘τ-value for risk capital allocation problems’, I show the existence of the τ-rule, and that it satisfies some intuitive properties.

“The most important observation is that the Euler rule is volatile, and thus sensitive to simulation error”

Recall the setting of Figure 1. Now, the only thing I change is the underlying risk measure p . Instead of a VaR, I let the risk measure be given by a 99%-expected shortfall. The expected shortfall gained popularity because it is sub-additive, in contrast to the VaR. The τ-rule and the Euler rule are shown in Figure 2. 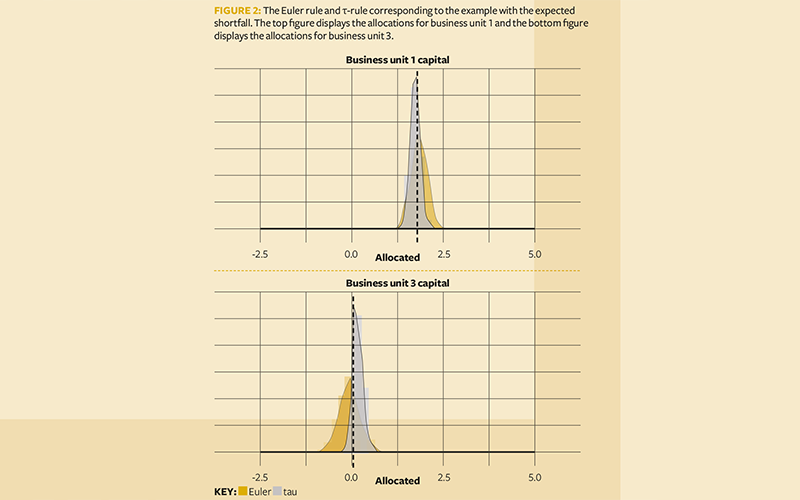 In Figure 1 and Figure 2, I show the Euler rule and τ-rule for simulated samples. Such a non-parametric approach could be performed in practice via historical or Monte Carlo simulations. One considers realisations of the past to approximate the distribution of losses in the future. Since I perform Monte Carlo simulations in these figures, I know the true underlying distribution from which the data is directly generated. This can also be used to compute the Euler rule and τ-rule. I show capital allocations according to the true distribution in Table 1. Note that business units 1 and 2 are symmetric in the sense that changing their labels yields the same multivariate distribution of the firm’s losses. Theoretically, therefore, these two business units get the same allocated capital under the τ-rule and under the Euler rule. Moreover, we see that in these examples the Euler rule exhibits a larger spread in allocation for business units 1 and 3 than the τ-rule. 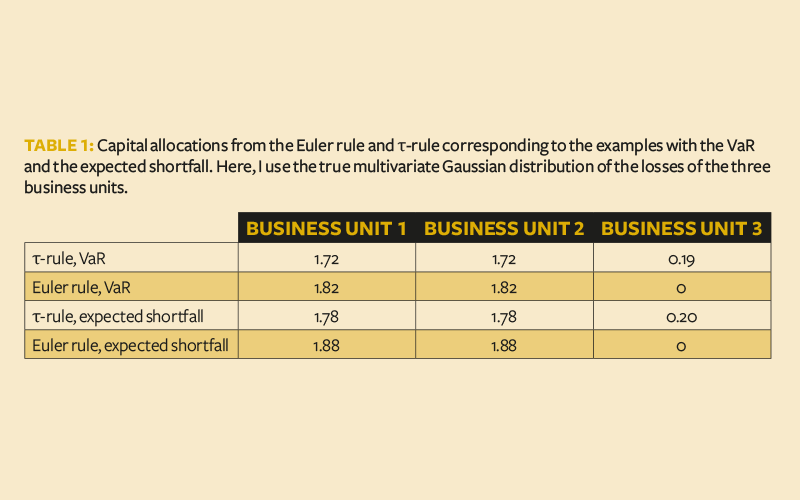 This article appeared in our January/February 2021 issue of The Actuary.
Click here to view this issue
Filed in
General Features
Topics
Environment
Careers