Sam Wilkin examines the geopolitical impacts of COVID-19, and suggests how relevant stress testing scenarios may be constructed 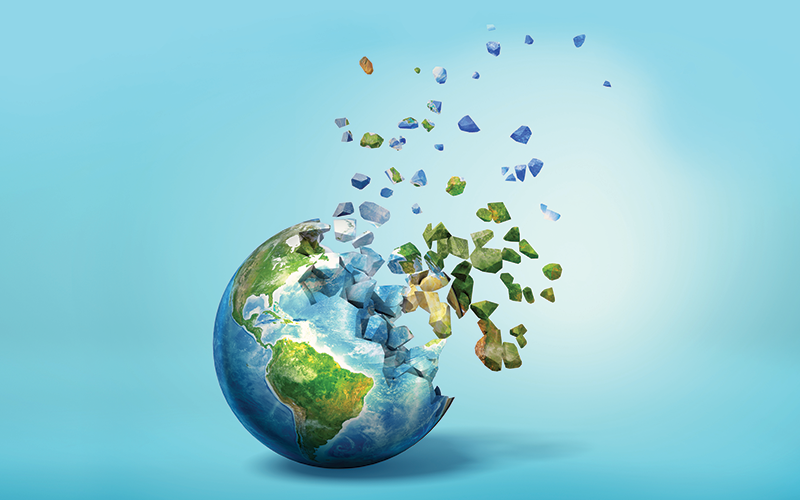 Compared to the current pandemic, the ‘global’ financial crisis of 2007-08 was almost unworthy of the term. While North America and Europe struggled, many of the world’s largest emerging markets avoided recession. Indeed, in 2008, more than 80% of the world’s economies recorded positive economic growth. The impact of COVID-19, in contrast, has been truly global. In 2020, of the 192 countries for which the IMF produces economic forecasts, 87% are expected to have experienced recession.

In the wake of the 2007-08 financial crisis, stress testing using scenarios became an increasingly popular risk management technique in the financial sector and beyond. We might presume, given the scale of the current crisis, that stress testing will now become even more popular.

Stress testing against economic or financial market shocks is challenging enough; how does one stress test for unprecedented events? There are many indications that scenario planning exercises carried out before the pandemic failed to prepare many governments in such a way that they could respond effectively. Which of the pandemic’s potential geopolitical consequences could be used as the basis for stress scenarios?

Perhaps because the pandemic-related downturn was so global, political responses were abrupt. Within a few weeks of the pandemic being officially declared, more than 70 countries had imposed restrictions on the export of pharmaceuticals or medical supplies, and more than 10 had imposed restrictions on the export of food or agricultural products believed to be scarce. There was violence as protesters opposed lockdowns and police sought to enforce them, reportedly leading to deaths in South Africa, Rwanda and Kenya.

Other geopolitical consequences became apparent as the year went on. Political and economic relations between China and the West deteriorated significantly. The US and China escalated their struggle for dominance in the technology sphere; the UK and China fell out over Hong Kong; Europe contemplated sanctions against China over human rights; and China and India engaged in a conflict in the Himalayas.

Meanwhile, the early restrictions on trade, now mostly rescinded, appear to have started a longer-term trend towards economic nationalism. One consequence of the downturn, coupled with supply chain disruption, was that countries found themselves only able to access goods that could be produced locally. Mercifully, the ability of many countries in Asia to control the virus and achieve economic recovery helped offset some of this shock – but many governments appear to have taken on board the need for increased self-reliance.

China’s post-pandemic recovery package, for instance, sought to bolster innovation by Chinese companies, especially in strategic industries. The recovery package in Japan included provisions to encourage reshoring of production. Europe’s recovery programmes have followed the same formula, promoting reshoring and domestic innovation. The US has taken highly punitive actions against individual Chinese companies that it perceives as a threat to US national security.

This shift towards nationalist industrial policy, in some cases promoting domestic firms at the expense of foreign competitors, appears to signal significant changes to the open, globalised system that multinational businesses have enjoyed in recent decades. The guiding principle of open globalisation, enshrined in trade deals, was ‘national treatment’ – that a company doing business across borders could expect to be treated in the same way as a domestic company. This principle may be one of the pandemic’s many casualties.

Other political consequences of the pandemic will become clear over time. Will populists experience a further gain? Will ‘temporary’ measures such as emergency powers, freedom of speech restrictions, and increased use of biometric technologies to monitor populations be used to undermine democratic rights?

Geopolitical events are inherently unpredictable, and are therefore a popular subject for stress testing and scenario planning. In many cases the political scenarios used for stress tests are simple, and developed without recourse to political science – for instance, ‘assume business interruption on the scale of France’s gilets jaunes movement happens in 10 European countries for two months’.

Political stress tests tend to use scenarios modelled on historical events, which is useful both for realism and for convincing constituents that a scenario is not excessive in its severity. That said, drawing on social sciences to develop scenarios can be useful in understanding the potential for correlations that are not present in historical data to emerge. Such correlations are the adversary of risk management efforts based on diversification.

One of the pandemic’s potential geopolitical impacts is a widespread increase in social unrest. Historically, social unrest has been strongly correlated with government austerity measures. As a result of the pandemic’s economic stresses, it is likely that there will be austerity in many countries around the world during the coming years, and austerity-related social unrest could be a relevant stress testing scenario (Figure 1). 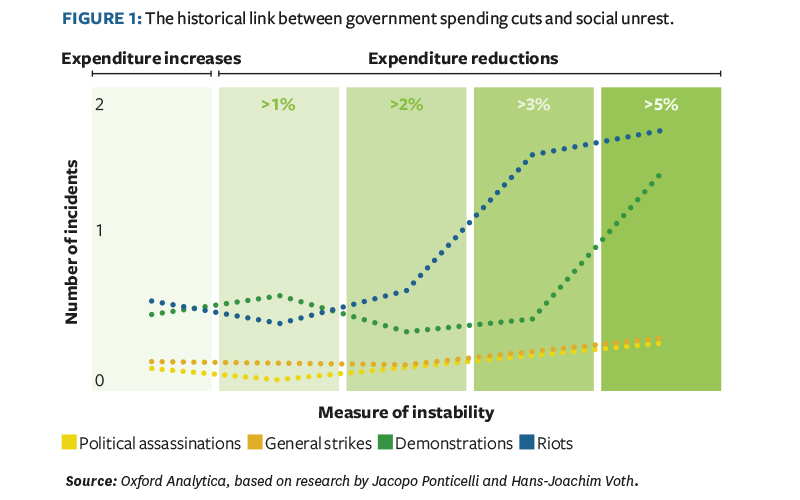 To develop the scenario, we have constructed a simple index of country risk with three components: political stability, people power and austerity (Table 1). There are many indicators that could be used to represent each of these components. To capture the likelihood of austerity, for instance, we might consider IMF forecasts of spending cuts, or longer-term drivers of future budget cuts, such as economic weakness or sovereign debt distress. In Table 1, we have represented austerity risks using the estimated severity of spending cuts and economic contraction in 2020.

‘People power’ may require some explanation. Media portrayals of social unrest often imply that protesters or rioters have taken leave of their senses or been driven to desperation. However, social unrest is more accurately seen as an expression of political power by people who believe they can be politically effective through mass action. That is why sudden and extremely disruptive outbreaks of unrest often take place in wealthier areas, as seen in Chile and Hong Kong. Mass unrest springs not only from popular grievances, but also from the public’s political effectiveness. Education and mobile phone penetration have been selected as the ‘people power’ indicators in Table 1.

At the time of writing, only Kyrgyzstan (ranked fifth in the index) has experienced mass unrest leading to a change of government in the wake of the pandemic. Kyrgyzstan is one of few countries in the world that is resource-rich but also has tourism playing a large economic role. As a result, the Kyrgyz government could not significantly increase spending to offset a COVID-19-related recession.

There are many ways to create a stress scenario using such an index. A simple method would be to combine the index factor with the political violence rating of different territories (available from providers such as Oxford Analytica) to determine the level of austerity-related social unrest that is likely to occur in each country.

This scenario could be enhanced by looking for other factors that might result in unexpected correlations. For instance, mass unrest is often subject to ‘demonstration effects’ – a protest movement in one country, especially a successful one that topples a government, can show the potential effectiveness of mass political action to protesters elsewhere. In this way, protest movements can spread on a regional basis, especially among countries that share a common language or culture – as we saw in the Arab Spring. 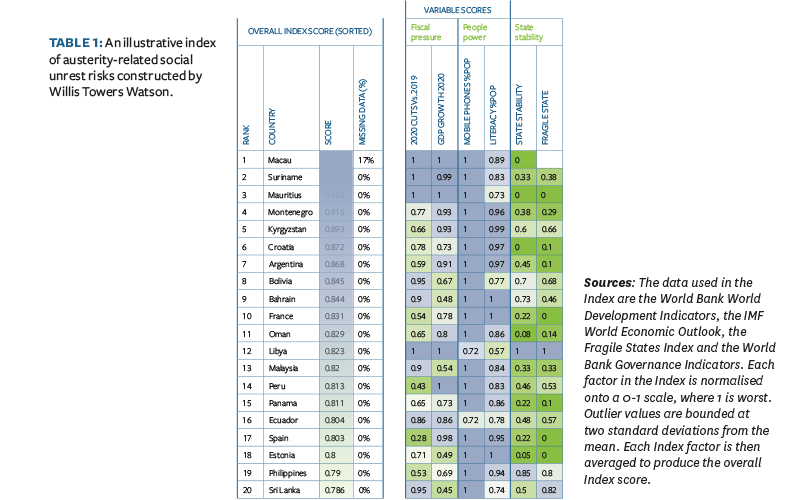 Geopolitics has long been a popular subject for scenario analysis, in part because of the unpredictability of political events. As scenario-based stress testing has evolved, with stress scenarios often quantified using actuarial techniques, geopolitics has remained important – even if most scenarios tend to be based around second-order impacts of political events, such as market movements or business interruption.

Because such second-order impacts are of primary interest, it is often tempting to focus on these impacts and neglect to fill in the outline of the political events that cause them. However, deepening the political analysis involved can be useful. More realistic scenarios can help to flag unexpected correlations, enable analysis of threats that are already known but may take time to emerge, and increase buy-in from management or other end users.

Sam Wilkin is the director of political risk analytics at Willis Towers Watson.