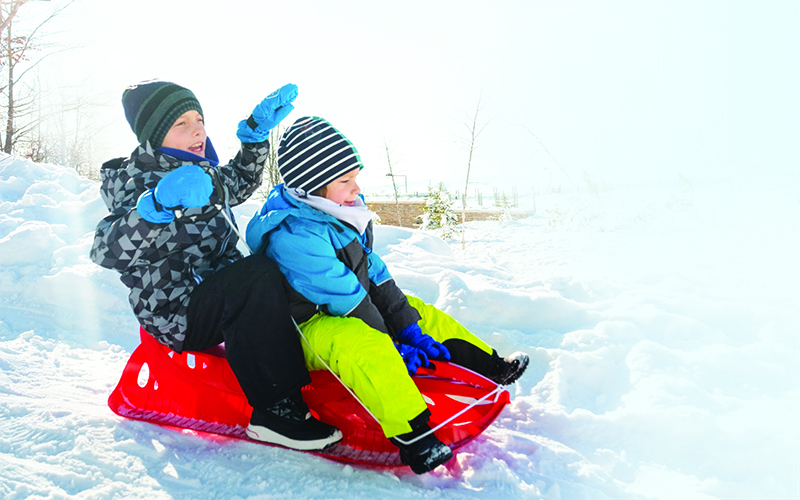 The so-called ‘Tuesday boy’ probability puzzle gives insight into both conditional probability and
the nature of mathematical modelling around uncertainty. It is a problem that is able to shock, frustrate and delight – and can lead to continued disagreement even among those who clearly understand its athematical solution. As such, it is an essential education for anyone in the business of explaining risk modelling to general audiences.

1. A simpler version of the puzzle has long been a feature of introductory probability classes:

Two boys: You meet a new colleague who tells you “I have two children, one of whom is a boy.”  What is the probability that both your colleague’s children are boys?

Many respond that the answer is ‘obviously’ ½, only for the puzzle setter to reveal the ‘true’ answer of ⅓, along with the following reasoning. Suppose each child is either a boy (B) or girl (G) with equal probability, and the genders of the two children are independent. There are then four possibilities for pairs of children {BB, BG, GB, GG}, each occurring with equal probability. Conditional on one of these children being a boy, three equally likely outcomes remain {BB, BG, GB}, and so the probability that both children are boys is  ⅓.

The logic is irrefutable, but somehow unconvincing for many, and indeed there is a much less discussed hidden layer to this problem that several variants help to reveal.

2. The ‘Tuesday boy’ variant of the problem, first showed to me by a colleague while I was teaching at Dulwich College in London, left me in an initial state of disbelief:

Tuesday boy: You meet a new colleague who tells you “I have two children, one of whom is a boy who was born on a Tuesday.” What is the probability that both your colleague’s children are boys?

How can knowing the boy was born on a Tuesday have any bearing on this problem? Surely this is independent of, and irrelevant to, the original problem? However, careful analysis shows us that the additional information does indeed change the correct answer to a value much closer to ½.

To see why, subdivide each of the four cases {BB, BG, GB, GG} into 49 possibilities of pairs of days on which each child could have been born. There are now 196 possibilities in total, each equally likely. There are 27 combinations that include a boy born on a Tuesday; of these, 13 have two boys, both born on Tuesday. Therefore, the probability of two boys is now 13/27 – quite close to ½ (Figure 1). 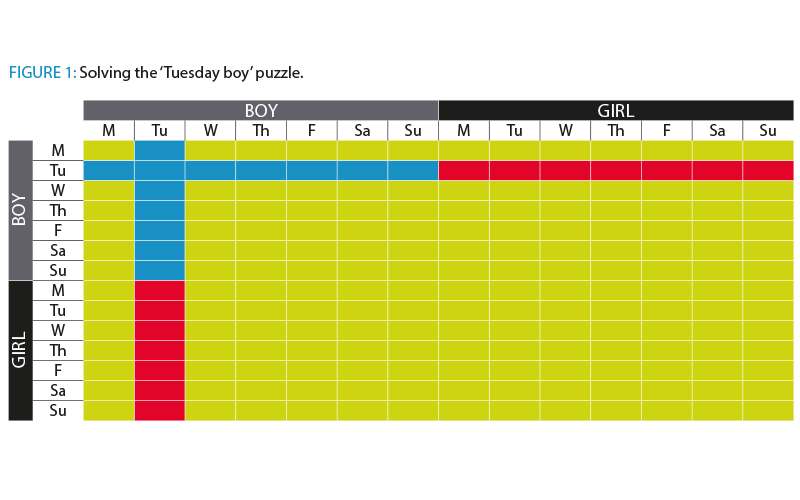 Christmas boy: You meet a new colleague who tells you “I have two children, one of whom is a boy who was born on Christmas Day.” What is the probability that both your colleague’s children are boys?

If we assume 365 days in the year, with births independent and equally likely on each day, then a similar argument yields an answer of 729/1,459 – even closer to ½.

4. Again, these mathematically irrefutable answers leave us searching for intuition, and a final variant is helpful to understand what is going on:

This boy: You meet a new colleague; he is sitting with a boy, who he introduces as one of his two children. What is the probability that both your colleague’s children are boys?

This is the simplest case of all, and the answer is ½ – though if you have thought too much about the previous puzzles, you would be forgiven for any doubt! In this variant, there is a particular child in front of you. A second child is somewhere else, and is equally likely to be a boy or a girl. Similarly, if you know the eldest child is a boy, the probability that the other is a boy is also ½. Writing the births in order, there are two of the four cases remaining {BG, BB} and the probability of two boys is clearly ½.

In each of these four problems, the answer depends on how specifically the information you are given identifies a particular child. If it is unlikely you would have two children satisfying the condition – for example being born on Christmas Day – then the answer is very close to ½. In the case of the particular child being in front of you, it is impossible that both children are that child, so the answer is ½. If the information is more generic, the probability will be closer to ⅓.

Even with this intuition, we may be left questioning whether this problem really makes sense as an applied probability question. In the initial ‘two boys’ problem, why do we accept the inference that the probabilities of each of the four outcomes are equally likely, and that the information you are given is conditioning these to {BB, BG, GB}? If someone said in conversation “I have two children, one of whom is a boy”, common experience tells us that, a very high proportion of the time, the speaker would have one boy and one girl, unless they are a probability puzzle setter.

There is something special about how the ‘Tuesday boy’ problem provokes debate. As well as being an interesting conditional probability puzzle, it helps us reflect on the nature of applied probability. The correct meaning of probability in this context, and perhaps in all applied probability problems, is that it represents uncertainty about the information we hold, rather than some inherent randomness of nature. As such, valid solutions to these problems are as much about the initial modelling assumptions as the technicalities of the pure probability. This makes them a particularly useful part of any education about modelling uncertainty in a professional context.

5. I leave you with a variant of my own creation – please tweet your answers to @mathsaurus and @TheActuaryMag.

Actuary boy: Your colleague passes you the latest edition of The Actuary magazine containing an article stating that 35% of actuaries are female and tells you “I have two children, one of whom is an actuary.” What is the probability that both your colleague’s children are boys?


Kevin Olding is the creator of the Mathsaurus website (mathsaurus.com) and YouTube channel, and a PhD student in the SAMBa Doctoral Training Centre at the University of Bath

This article appeared in our December 2020 issue of The Actuary.
Click here to view this issue
Also filed in:
General Features
Topics:
General Insurance
Modelling/software