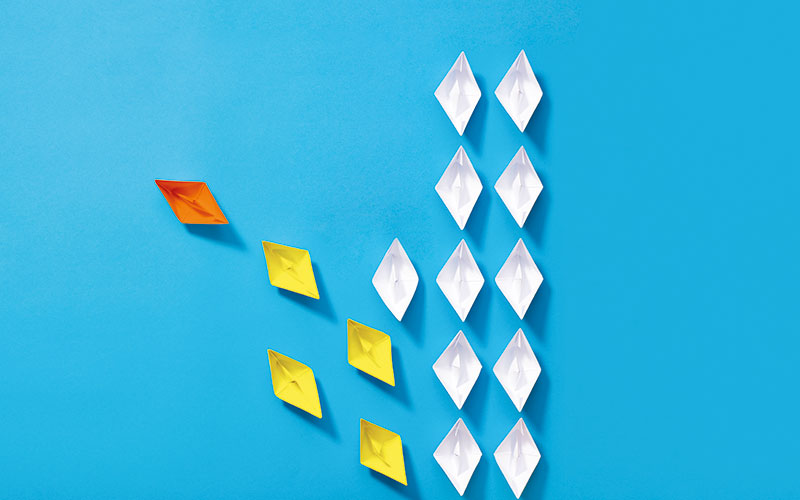 Influence in the workplace helps us initiate actions, steer strategy and achieve outcomes. The strength of our influence can determine success in our roles and careers. We explored this in April at a CIGI webinar, The Influential Actuary: Identity’s Effect on Data Interpretation.

We first considered how unconscious bias can affect data interpretation. A US research study in the journal Behavioural Public Policy explored why public opinion is often split over certain issues, despite compelling and widely accessible scientific evidence in support of one side of the debate. Examples include climate change, gun control, vaccination programmes, austerity and management of nuclear waste.

The study involved 1,111 US citizens, categorised by numeracy, political affiliation and values. Participants were asked to interpret a synthesised dataset (supposedly from a skin treatment trial) that was designed to illicit incorrect conclusions from cursory analysis. As expected, the accuracy of interpretation improved with numeracy levels. However, when this same data was presented as relating to gun control the interpretation became polarised, reflecting respondents’ political beliefs. Surprisingly, this polarisation increased with higher levels of numeracy.

Assuming this result was applicable more generally, our webinar considered whether interpretation of financial data might also be skewed by relevant identity effects – say, a belief in and connection to the continuing growth and profitability of a business. (To note: we are not suggesting that political beliefs, gender or race would influence interpretation of financial data!)

The Prudential Regulation Authority (PRA) made comments related to this when writing to CEOs and chief actuaries in November 2019, citing instances of greater emphasis being placed by management on the ‘upside’ rather than the ‘downside’ when interpreting data on firms’ reserves. The PRA said firms should have systems in place so that control functions, including the actuarial function, operate with an appropriate degree of independence.

How to gain influence

During the webinar we shared 10 tips from Jennifer R Farmer, as detailed in her article ‘10 powerful ways to influence people positively’. Some chimed with our own experiences and beliefs, such as authenticity, listening, kindness, and operating from your own area of expertise.

More challenging was tip 9: understanding a person’s logical, emotional and cooperative needs. What matters most in different circumstances – a person’s rational and educational needs, information that has touched them in a personal manner, or their need for cooperation with others? Understanding identity (who we are and what we’re here for) and belonging (are you with us?) aren’t in the actuarial exams, but they may be critical to achieving influence.

How can you achieve influence and connection in different environments? Common language, goals and values will help, and this can work in both directions. Listen for key words and concepts and adopt them. Introduce words and share concepts that you use and that add value. Consistent and regular use, and clear explanations (including ‘teach-ins’), can strengthen engagement, understanding, personal connection and trust.

Some influence-building activities are particularly relevant to actuaries: focusing on understanding the needs of the business and the key functions within it; identifying where actuaries can add value and presenting results and recommendations in the most effective way; and the development of financial risk and performance ‘dashboards’. Actuaries might participate in cross-team work on projects and internal secondments in order to broaden and strengthen their networks, as well as engaging in shared social activities.

“But,” we were asked by a CIGI participant, “I am a woman working in a predominantly male environment. Using these recommended behaviours to build my influence is making things worse! What is your advice?” The all-male presentation team did not claim to know the answers, but it was important to consider.

For some, trust-building is instinctive and happens almost automatically. Perhaps we have much in common, through educational or professional background, interests or experiences. However, this ‘ease’ might lead to unconscious bias against others. Consider this: do you find it easier to talk to or engage with other actuaries, especially socially? If you want to understand unconscious bias, look no further.

The PRA wrote a letter to chief actuaries in September 2018 entitled ‘Joining the dots’, which stressed the importance of forming a holistic view of a firm’s risk profile, and stating that this required engagement with other key functions. It also said: “Board engagement could be improved through more regular one-to-one discussions with individual board members and the provision of more concise reports to the board.” Feedback from chief actuaries suggested that communications from the regulator could help build engagement with boards, for example by sharing analysis of a firm’s approach to any issues identified.

The PRA wrote to insurers and banks in March 2020, stating: “Diverse boards, made up of members with different skills, knowledge, experience and values, will support different perspectives being brought to discussion on business operations and risk strategy. PRA diversity requirements aim to reduce the risk of groupthink, which can adversely affect the safety and soundness of PRA regulated firms.”

Diverse teams within an inclusive culture, with broader sets of skills, experiences and perspectives, should have greater resilience and ultimately more potential in complex domains such as business, science or the delivery of public services. Using data from the UEFA Champions League football tournament between 2003 and 2013, a study led by Keith Ingersoll of Kaplan University found that more diverse teams outperformed less diverse ones, as measured by goal difference and ‘linguistic distance’.

The PRA’s November 2019 letter to CEOs commented on less positive aspects of culture within firms: “Recent public reports relating to sexual harassment and bullying within the London Market are of deep concern and it is clear that some firms have more work to do to improve aspects of corporate culture and individual behaviour.”

Overt acts of racism, bullying and harassment are unacceptable and should be challenged. However, the question we were asked by the CIGI participant was more subtle. To paraphrase: how can I be better included at work, to have open lines of communication, positive engagement and the opportunity to build trust and influence?

Let’s look at unconscious bias. Women may face certain expectations of behaviour within the workplace. Wei Zheng, Ronit Kark and Alyson Meister analyse this in their article ‘How women manage the gendered norms of leadership’, explaining how women face a “double bind”. Society expects women to be “warm and nice”, but also expects leaders to be “competent and tough”. Using new influencing skills is difficult enough, but try also balancing the tension between leadership and acceptable behaviours. The article discussed a woman being labelled “intimidating” for pushing the value of a new project, in contrast to the way a man might be treated.

It presents strategies for managing this double bind in the short term, but concludes: “Organisations and society
must produce systematic change to alleviate conflicting expectations for women and additional hurdles for their leadership.” The person being excluded shouldn’t be expected to solve the problem, nor is it simply about others behaving better. Moreover, unconscious bias has a broad reach. Race, sexual orientation, gender identity, age, religion, disabilities and social status are all potential sources of bias, especially where these intersect.

It’s important we acknowledge the existence of unconscious bias and challenge its effects. It may manifest in the way technical analysis is interpreted by those in different roles, who have different views of their purpose; an awareness of this can help us tailor our influencing skills.

However, separate biases within the workplace mean some people have additional challenges. Everyone has influence and many of us are in positions of power, which we can use to support a more diverse and inclusive working environment. This will help us and those around us to be better prepared for the challenges ahead.

The Influential Actuary: Identity’s Effect on Data Interpretation was presented by James Orr, Chris Smerald and David Gurteen on 22 April 2020 as part of the Current Issues in General Insurance (CIGI) conference.

James Orr is chief actuary for general insurance at the Prudential Regulation Authority. This article contains the views of the author and do not necessarily reflect those of his employer

This article appeared in our October 2020 issue of The Actuary.
Click here to view this issue
Also filed in
General Features
Topics
Professional
Careers