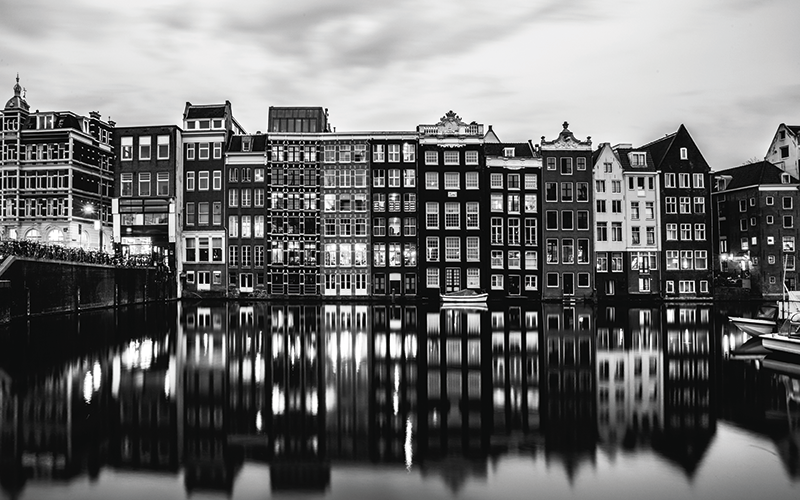 If the general level of house prices falls a long way, policymakers may introduce new policies that seek to support prices. In a recent paper in Annals of Actuarial Science, ‘Valuation of no-negative-equity guarantees with a lower reflecting barrier’, I model the effect of such interventions on the valuation of no negative equity guarantees (NNEG) in equity release mortgages. The key point is that assuming a reflecting barrier even as much as 50% below today’s prices can substantially reduce the value of NNEGs.

An equity release mortgage involves a homeowner typically aged 60 or more borrowing 25-30% of the value of their home from an insurer. A fixed rate of interest is charged, but not actually paid. On the borrower’s death or any earlier sale of the house, the loan and rolled-up interest are repaid. The NNEG guarantees that the amount repayable will not exceed the sale proceeds of the house.

The lender’s offer of the guarantee is akin to writing a long-term put option on the price of the house, with a strike price defined as the rolled-up loan at the date of sale. This option is difficult to value. In 2018 the Prudential Regulation Authority (PRA) effectively mandated a Black-Scholes type formula with prescribed parameters, at least for certain regulatory purposes.

This approach arguably applies a short-term formula outside its intended timescale, like trying to use an egg-timer as a calendar. In particular, it ignores the likely government response to a deep and prolonged fall in house prices.

“Black-Scholes ...like trying to use an egg-timer as a calendar”

The idea of a reflecting barrier can be justified in two broad ways. First, the intervention rationale: a deep and prolonged fall in house prices, with the attendant collapse in mortgage lending, widespread repossessions and distress in the electorate, seems overwhelmingly likely to induce a policymaker response. Second, the economic rationale: housing (and particularly freehold land) is a fundamentally different type of asset to the underlying equity asset in many other option valuations.

The economic rationale has three legs. First, the absolute nature of freehold claims, compared with the residual nature of equity claims (as reflected in the greater ease of borrowing secured on property rather than equity). Second, the supply of new land (constrained by the planning process) is less elastic than the supply of new equity (facilitated by the everyday operation of the capital markets). Third, land in good neighbourhoods is a positional good. As society becomes richer and basic needs are more readily satisfied, a rising fraction of income is devoted to competing for such goods.

Different rationales may be useful in different contexts, or appeal to different audiences. The existence of multiple rationales may also be persuasive when viewed through the lens of investment, rather than mathematical, epistemology. By this, I mean the view that several weaker (but independent) reasons for believing something are usually more convincing than a single purported proof. 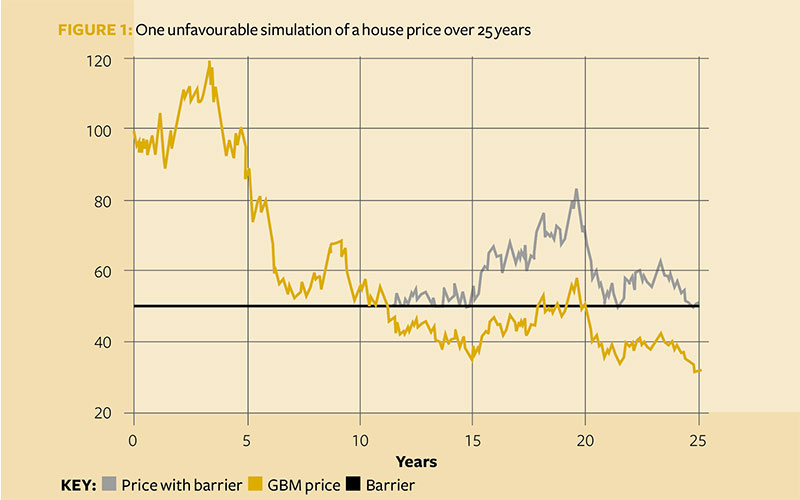 We start with a standard geometric Brownian motion for the price process. We then impose a reflecting barrier (expressed as a fraction of today’s spot price) somewhere below the lower of spot and strike prices. The strike can be either lower or higher than spot, ie in or out of the money.

The spot price evolves as a geometric Brownian motion, except that if the spot price hits the barrier from above, reflection occurs instantaneously and with infinitesimal size. We can think of this as the state making a small purchase that prevents the price falling below the barrier. Figure 1 illustrates how it works for one unfavourable simulation over 25 years.

The instantaneous nature of the reflection means that the price does not spend any finite time at the barrier, so no arbitrage opportunities are created (we can never buy at the barrier with certainty of a price rise). The absence of arbitrage ensures that an equivalent martingale measure exists – in other words, a risk-neutralised density for the asset price at maturity exists. We can thus price the put option with reflecting barrier by integrating its intrinsic value over this risk-neutral density.

That is, we integrate

where r is the risk-free rate, b is the barrier, X is the strike and ST is the house price at time T (the maturity
of the option). This gives the formula shown in the panel. To understand the formula intuitively, note that P(X) – P(b) is the premium we receive to enter a bull put spread. This option position involves selling a put with a high strike X (the rolled-up loan) and buying a put with a low strike b (the barrier). The maximum loss we can incur from this position at maturity is (X – b), but the price diffusion on the path to maturity can go below b (and may be below b at maturity).

Now think about the payoff of the put with reflecting barrier, instead of the bull put spread. The maximum loss is the same, but the price diffusion is modified so that it can never go below b. Intuitively, this modification means that the put with reflecting barrier must be worth a bit less than the bull put spread. Consistent with this intuition, the 1ϴ term in the formula evaluates as zero for b = 0 and b = X, and negative everywhere in between.

The formula looks complicated, but it can be validated by Monte Carlo methods. The complication is algebraic rather than parametric: there is only a single extra parameter, the barrier level b. The value of this parameter can be thought of as a shorthand for different strengths of belief about the intervention or economic rationales as described above.

Figure 2 illustrates the formula for a specimen NNEG and bull put spread with term 25 years, spot price 1,
strike price 0.8, risk-free rate 1.5%, deferment rate 1% and volatility 13%. Note that when the barrier b = 0, the NNEG is worth its Black-Scholes value of 0.077; as b increases the value reduces, and once b ≥ 0.8 the value is always zero (because b ≥ 0.8 means the price can never go below the barrier).

The barrier method always gives a lower valuation than Black-Scholes. However, for a given level of barrier, the fractional reduction compared with Black-Scholes is smaller for higher roll-up rates, higher initial loan-to-value, and longer terms (these all increase the rolled-up loan and hence the strike price, so the barrier becomes less important). The barrier method’s higher relative valuation of the more leveraged cases seems a reassuring feature.

A common but disputed approach to NNEG valuation in practice has been to make an ad hoc modification to Black-Scholes, replacing the prepaid forward price (deferment price, to use the PRA’s term) with a projected price at maturity. This is sometimes called the real-world method. How does the barrier model compare?

A further insight into Figure 3 can be gained by noting that the Black-Scholes value of 0.077 can be identified in two distinct ways. First, it is ‘the barrier model with a zero barrier’ (ie the grey curve when b = 0 on the lower axis). Second, it is ‘the real-world model with house price growth equal to risk-free less deferment’ (ie the yellow curve when growth = 0.5% on the upper axis). The latter interpretation corresponds to the intersection of the yellow curve with the flat segment of the grey curve, along which the option value is 0.077.

A curious consequence of introducing the barrier is that the standard put-call parity no longer holds. To be precise, the difference between risk-neutral prices for a call and a put with the same strike (each constructed by dynamic hedging) is not equal to the forward price with the same strike (constructed by a static hedge). Intuitively, this is because a static hedge receives the full benefit of all the instantaneous interventions at the barrier, whereas a dynamic hedge needs to anticipate them (because whenever the price instantaneously touches the barrier, we do not have time to adjust the hedge).

In the NNEG context, we require only put prices, and calls are not traded. A pragmatic solution is to adopt the risk-neutral price for a put, and note the need for caution about inferring the price of a call. The technical point is discussed further in the Annals paper. 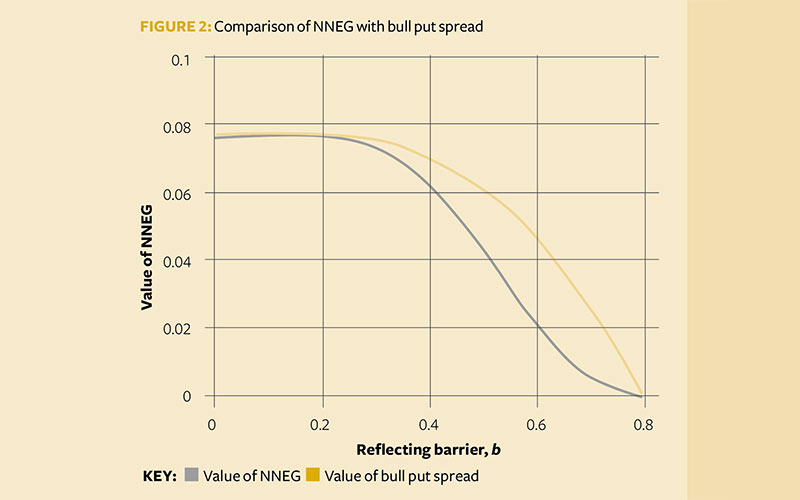 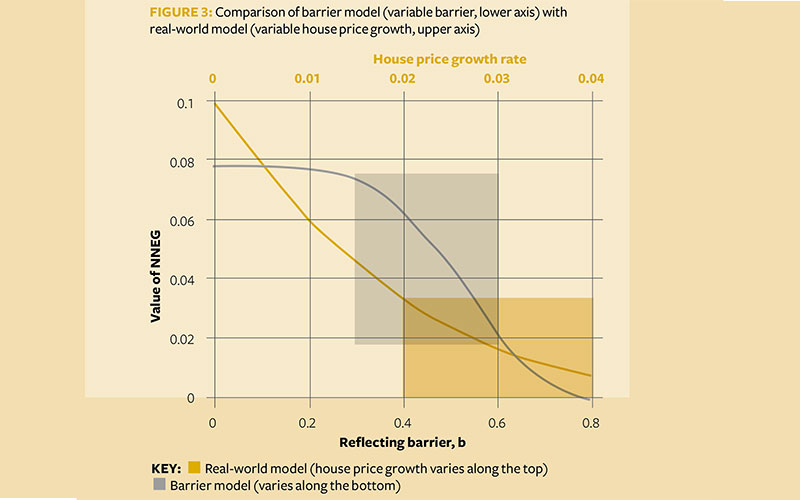 On the one hand, realistic interventions cannot place a completely firm barrier at a particular level. In this sense, the model overstates the certainty and efficacy of intervention.

On the other hand, it seems unlikely that policymakers considering intervention at some distant future date will make their decisions by reference to today’s price level. They are more likely to be concerned with how far and how fast prices have fallen from their recent levels at the time when intervention is being contemplated. In this sense, the model understates the prospect of interventions where prices first rise substantially from today’s levels and then fall.

In short, limits to the realism of the model are not difficult to find. However, it may still represent an improvement on Black-Scholes, which makes no allowance for intervention in a market where most voters hold most of their wealth. This seems to defy a basic reality of political economy.

Unlike the real-world model, the barrier model’s departure from Black-Scholes has a rigorous justification. It is also transparent: the barrier assumption can be clearly explained to all stakeholders, including those who may not appreciate all the technicalities of option pricing. There remains the question of what level of barrier to use. After reviewing evidence from many countries, I tentatively suggest a level of 50% of today’s prices. This would encompass the long-term experience in Japan.

One can conceive of cosmic catastrophes where this level is breached, all intervention fails and insurers struggle to pay their annuities. In such scenarios, though, there would probably also be no banks through which to pay them, and no shops in which annuitants could spend the money.

Others may prefer to use different levels, or disagree that we should use a barrier at all. However, if no barrier is used, we should recognise that much of the resulting value of NNEG may derive not from poor scenarios where house prices merely stagnate or fall, but from cataclysmic scenarios where they fall by more than 50% during the term of the NNEG.

The risk-neutral value of NNEG with a reflecting barrier at b < min (S, X) is P(X) – P(b)+ Adjustment where the two Ps are the Black-Scholes prices for puts with strikes X and b, and Adjustment (always ≤ 0) is

The Normal arguments z2, z3, z4 have the same form as the usual Black-Scholes Normal argument (say z1), but with the term ln(S/X) replaced by ln(b2/XS), ln(S/b) and ln(b/S) respectively.

Guy Thomas is an honorary lecturer at the University of Kent. His latest book is Loss Coverage: Why Insurance Works Better with Some Adverse Selection

This article appeared in our October 2020 issue of The Actuary.
Click here to view this issue
Also filed in
General Features
Topics
Modelling/software