Wellbeing: behind the curtain

During what is proving to be a difficult and stressful time for many John Taylor reflects on his own mental health experiences, and the value of reaching out 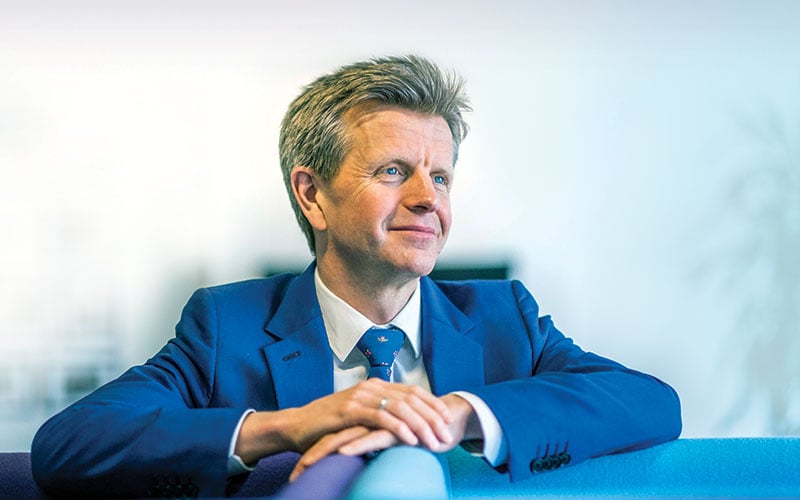 I’m sharing my mental health experiences now because the topic has rarely been so important. A combination of social distancing and the lurking threat of the virus is causing widespread psychological stress – yet many are reluctant to share their feelings, due to a persistent stigma around mental health issues.

By following in the footsteps of others who have shared their stories, I’m hoping to make a small dent in that stigma. It’s not that mine is so extraordinary that it will single-handedly shatter the stigma; nor will it become a celebrated case study in The Annual Review of Psychology.  It’s a pretty ordinary story of long-term anxiety and depression – one that is, I suspect, all too common.

As I type, this feels like a very private act, and I’m questioning how open to be. I’ve decided to share enough to enable some readers to connect with the details, but will keep some things private – partly out of consideration for others in the story, and partly because the stigma still has some power over me.

Looking back, I realise my experience goes back many decades. Those ‘dark moods’ at university where I’d avoid social contact were almost certainly mild depression. Most often, these moods came without any obvious cause. I was fortunate not to have serious symptoms such as self-harm or substance addiction, but it also meant I had no obvious trigger for seeking help.

I managed to function throughout these episodes with a tremendous amount of conscious effort. The drive to keep going came from a fear of succumbing to the despair. What would happen if I stayed in bed one day, and then the next? If I didn’t go to that party tonight, would I ever go to another? I didn’t want to contemplate the answers to these questions. Life often felt precarious, like I was within touching distance of some sort of breakdown.

As a young adult, I tried to make sense of this. Most frequently, I’d tell myself that everyone suffers and we just need to get on with it. I’d tell myself that I wasn’t allowed to feel down because I hadn’t suffered any unusual trauma in my life. These interpretations didn’t encourage me to seek help; the stigma was at work within me.

My career progressed well but there was periodic despair. The contrast between the bright career and dark moods made the self-examinations even more eviscerating. Nothing in my environment would account for these moods; the explanation must lie within. I came to suspect there was something really wrong with me. I didn’t know what this was, but I had a sense that it would be too painful to confront, so I’d immerse myself in work, socialising and sport.

What I couldn’t disregard was the disturbed sleep. I still remember the experience of waking as akin to swimming up from the depths, racing to the surface for fear of drowning. I’d lie awake with my heart pounding, unable to get back to sleep. When morning came, I would force myself out of bed despite the fatigue. Adrenaline would see me through the day until the cycle repeated.

“After long years of secrecy, my experience of talking about mental health has been universally positive – for me and for others”
- John Taylor president of the IFoA

This made me realise that I needed help. Years of depression and anxiety had built to what seemed like
a pivotal moment: finally seeking professional help. I was left feeling somewhat bewildered when I emerged with a prescription for antidepressants after only a few minutes in front of a GP. There followed several years of life with medication. I struggle to recall whether my mood improved, but I think I took some comfort from the fact
that I was taking action.

Periodically, I would try some form of therapy, from cognitive behavioural therapy to psychotherapy. These helped me start to understand how my mind worked. I realised that what often kept me awake was known as ‘catastrophising’, when you start with one bad event and then imagine a series of worst-case consequences.

For instance, I might start by worrying about a bad meeting at work. From there, I’d fear that this would lead to the sack. That sacking could mean I’d never work again. Ultimately, I’d be unable to pay the mortgage and I’d be homeless. And all this would follow from one bad meeting! What seems risible now seemed alarmingly plausible all those years ago in the middle of the night.

As I worked with a therapist, I began to realise that a lack of self-esteem was a fundamental contributor. It was a belief in my own inadequacy that made these catastrophes seem plausible. This new awareness of what my mind was doing to itself helped me get some perspective, and tempered the catastrophising.

Having poor self-esteem is not much fun. But it often comes with compensation: a powerful desire to prove yourself. That drove me on to climb the career ladder, in the hope that each successive rung would deliver that elusive proof that I was okay. Each step did provide a temporary balm, but the gnawing insecurity would return.

Things carried on like this for a few years until I met my wife-to-be. While the excitement and joy of having this person in my life improved my mood significantly and made me more optimistic, it created a new stress for me. Should I tell her about my shameful mental health secret? What if the revelation causes her to reconsider our relationship when she saw the real me?

I decided to tell her. With great trepidation, I braced myself to share my shameful secret, half-expecting that it would end our relationship. But no: although surprised, she was immediately supportive and keen to understand more. If anything, this discussion brought us even closer.

We got married and, within a year, had a child. Despite our new-born daughter hardly helping with my sleep pattern, my mood improved significantly. The simple joys of first smiles, steps and words were irresistible. I also felt I had a responsibility to my daughter and was invested in the future. This was a turning point for me.

The same troubling thoughts and self-doubt were still there, but less acutely, and the improvement was enough for me to wean myself off medication. After several months, I was off medication and in pretty good mental health.

It seemed plain sailing for a while until a relatively small challenge at work triggered a lot of the old feelings. I didn’t want to start medicating again after my hard-won efforts to stop, so I decided to engage with counselling in
a more committed manner.

It can take several attempts to find a counsellor with whom you work well. Thanks to a referral, I found a wonderful counsellor who understood me. She practices a form of psychotherapy that involves exploring the origins of feelings, with a view to better understanding and adapting to them. I quickly felt better because someone understood my issues, and I was addressing them. That got me through the initial crisis.

All of this took place more than 10 years ago. Since then, I’ve maintained a regular relationship with the same counsellor. I don’t consider myself to have significant mental health challenges now, but the understanding I continue to gain about myself feels very valuable. Importantly, it helps me to better appreciate the goals that matter to me – they’re no longer about proving myself to others.

Like everyone else, I still have my moments. These might be caused by an event that triggers some old perspectives. A combination of counselling and regular exercise helps to keep things manageable. I even talk to other people, too! The first time I disclosed my mental health story, it had taken the prospect of marriage. The
second time, years later, owed much to serendipity.

A close friend and I went to see a play in which two performers re-enacted their own mental health experiences. After a standing ovation, they exhorted the audience to talk more about these issues. Doing so with my friend afterwards, I felt increasingly uncomfortable in not acknowledging my own experience – so I confessed! To having taken medication. To seeing a counsellor. Again, nothing terrible happened. Ever since that second experience of disclosing, I’ve not had to wait for marriage or a play to talk about mental health. I’ve been increasingly open with my close circle of friends.

Most have been surprised by my revelation, trying to reconcile it with what they see as my ‘calm and collected’, ‘self-assured’ demeanour. I realise I’ve been successful in suppressing that inner anxiety, but the consequence of suppression was all those issues I mentioned previously. Counselling gave me a better strategy, where I faced up to the anxiety, understood it and changed the way I think about it.

After long years of secrecy, my experience of talking has been universally positive – for me and for others. So much so that I’m now doing something that would have horrified me previously: sharing with a much wider audience. I don’t offer this as a prescription for anyone else; each of us is unique and we need to find our own way.

For those suffering, I hope it comforts you to know that you are not alone, and that you will feel motivated to recognise and start addressing your own challenges. If you are yet to talk about your suffering or seek help, please think about doing so – my own experience of opening up has been exclusively positive, despite my fears to the contrary.

If you are lucky enough not to be a sufferer (at the moment), be aware that 25% of people experience a mental health problem in a typical year, and 2020 is not a typical year! There are many sufferers around you, some of whom you wouldn’t expect.

However you view yourself, you could do worse than remember Kurt Vonnegut’s summation of the meaning of life: “We’re here to help each other get through this thing, whatever it is.”

This article appeared in our June 2020 issue of The Actuary.
Click here to view this issue
Also filed in
General Features
Topics
Soft skills
Careers