Alan was a larger-than-life character who was admired and respected by people in and outside the actuarial profession. 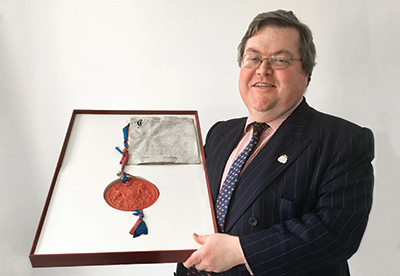 Alan was a larger-than-life character who was admired and respected by people in and outside the actuarial profession.

He studied actuarial science at Heriot-Watt, followed by a masters in technology management at Stirling University, and then embarked on an actuarial career in pension consulting, working for Buck Consulting, JLT and then AON, where he had worked for the past 12 years. He was a scheme actuary advising trustees and corporate clients on all aspects of occupational pension schemes.

He was also the local Quality Champion for the AON Retirement team in Scotland, helping ensure that it delivered the quality of advice expected of a firm that’s accredited in the IFoA’s Quality Assurance Scheme.

Alan was very generous with the time he dedicated to supporting and promoting the actuarial profession. He first joined the council of the then Faculty of Actuaries in 2007, and was its last honorary secretary. He was elected to Council in 2011 and served for two consecutive terms before a bye-law (which he was instrumental in drafting) forced him to retire.

As leader he is fondly remembered not just for the home baking that he brought to each meeting, but also for the way he supported and empowered the younger members of the Board and how he treated the IFoA staff who supported him in this role. Despite stepping back from the Board, Alan was still keen to play a role within the profession and was recently appointed one of the first trustees of the IFoA Foundation.

Alan served as chairman of the Standards Review Committee and at various times as a member of Management Board, Pension Board, the Awards Committee and the Actuaries’ Code Review Working Party.

He represented the IFoA at a wide variety of events, particularly in the Scottish civic community – always ready to don the old Faculty of Actuaries robes and take part in formal procession through the streets of Edinburgh. He was happy to attend school and university careers fairs to promote the profession, which he did with evident affection.

Alan had a busy life outside of the profession, actively involved in various clubs and societies and often ending up as an office bearer – running organisations seemed to be a hobby of his! He was secretary and then treasurer of his local philatelic society, which led to him becoming secretary of the Scottish Philatelic Federation, and was also the secretary of the Heraldry Society of Scotland, designing his own coat of arms. As a tribute to his actuarial career, this included an hourglass.

Alan will be missed by all of us who have had the good fortune to work with him.