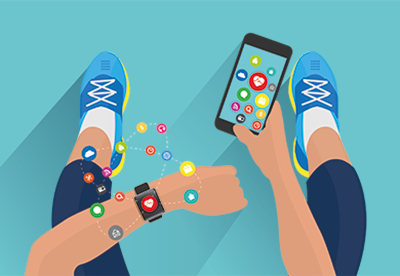 We are living in the age of the ‘quantified self’ – people’s growing appetite for measuring data about themselves, generally to improve physical, mental and emotional performance. Consumer and medical wearable devices help us track factors such as physical activity, calorie intake, sleep quality, glucose, blood pressure, heart health and brain activity.

In 2019, it was estimated that there were 216m such devices; this is expected to reach 614m by 2025. By 2023, around five million individuals are predicted to be remotely monitored  by healthcare providers.

Wearables are not new to the insurance industry. Several years ago, a corporation launched a ‘million-step challenge’ for its employees, offering them free tracking devices if they tracked their step count for a year. To become eligible for the company’s premium health plan, employees needed to achieve the target; 92% accomplished this, and the company reduced its healthcare costs by about 3.5%.

More recently, some insurers have been leveraging public interest in health and wellbeing technology, as well as self-surveillance, to engage with customers and incentivise healthier behaviours. Successful completion of fitness goals is rewarded with gift cards, subsidised wearables and lower insurance premiums. Other, more controversial, approaches include punishing employees for not meeting goals by depriving them of wellness benefits.

We have seen UK insurers combining policies for type 2 diabetics with tracking devices to enable tracking of blood glucose and help them better manage their conditions. Some insurers are also launching policies that include trackers to help seniors become proactive about their health as they age.

Wearables are seen as a good way to raise awareness of our current habits – we typically think that we do more activity or get more sleep than we actually do. Having this baseline means we can set a realistic goal, which we can track. Seeing improvements is motivating, and the longer our ‘streak’ (days in a row of hitting our targets), the greater the lengths we go to in order to avoid breaking it.

Outcomes from clinical studies are mixed and often conflicting. Generally, the most positive effects from wearables are reported in the short term; it has been shown that continuous monitoring (unlike infrequent or intermittent monitoring) can lead to increased engagement, while face-to-face counselling increases success further. Sharing one’s own data publicly is particularly successful for securing long-term engagement.

General population interventions using wearable trackers have been associated with significant rises in daily step counts, as well as increased physical activity and calories burnt. Interestingly, there is evidence to suggest that removal of previous incentives diminishes the impact on the intended behaviour change associated with that incentive.

Reviews of trackers for cancer patients have linked sustained recovery plan engagement to well-defined exercise programmes, firm goals and detailed instructions or delivery in person. Studies that monitor patients with chronic conditions using activity trackers suggest that those who track often and are more active are more likely to adhere to medications. Diabetes trials have seen success, particularly when automatic screening is followed by live prompts and information being sent to patients’ phones. Furthermore, numerous studies indicate that the best results are achieved when real-time feedback is tailored to users’ priorities: healthy snack ideas for those trying to lose weight, holistic sleep strategies for those aiming to get more sleep, and so on.

The clinical evidence is not currently sufficient to conclude that desirable customer outcomes can be created by wearables alone. Generally, data fetishism (becoming enticed by the satisfaction offered by numerical data), combined with personal informatics (having your own data at your fingertips) and immediate gratification from the wearable provides motivation to make short-term changes.

It is more challenging to convert the stimulus into long-term, intrinsically motivated habits. Around half of consumers stop using their device at some point, and a third will do so within half a year. This doesn’t bode well given that psychologists believe it can take longer than this to change a habit or learn a new behaviour.

Additionally, there are discrepancies between measurements taken by different devices. Some relate to incorrect device use, but others are more systematic, such as device developments over time and inconsistency of data collected. Besides, measures such as distance travelled or calories spent are determined using stride lengths and metabolic rates that are assumed, not measured directly.

The readings are also affected by how the device is used during data collection. According to a recent review of studies examining wearables’ accuracy at detecting heart rate variability, wearable devices may provide a non-invasive alternative to measurement during rest, but fail with increasing levels of exercise.

Furthermore, gaps remain in the evidence base around the use of wearables to influence clinical outcomes, partly because many devices are yet to be tested in randomised control trials with meaningful results.

There are also concerns that people might go to extreme lengths to hit a target. Alternatively, if someone knows they haven’t got a chance of reaching their goal, they might give up altogether.

There are also customer concerns about potential impact on their employment, and the general fear of surveillance. Insurers must ensure customers are clear about, and comfortable with, the data they are sharing. Trust can be created by demonstrating how the collected data is connected to the cover provided, as well as insurers abiding by not only the letter but also the spirit of regulation.

The future of wearables

The gap between consumer and medical devices is shrinking. Apple has already received FDA approval for the electrocardiogram feature of the Apple Watch series 4 and Withings will soon release the ScanWatch, which combines a medical-grade electrocardiogram with sleep apnoea detection. The ScanWatch also exemplifies a second trend: improvements in design elements. This may not only improve users’ engagement with devices, but also help ensure that they are being worn properly for accurate measurement.

While wearables can enhance underwriting and pricing, it will take more than auto-analytics technology to compel a far-reaching movement to change behaviours.

However, wearables have shown potential to promote changes in the short-term through self-monitoring and improved use of continuous monitoring. Coupled with behaviour-changing techniques and improved design, this may lead to long-term results. With the mindset shift from treatment to prevention, wearables can create more natural touchpoints for insurer and customer. They may provide an opportunity for the insurer to be the protagonist in the healthier lives of their policyholders, and we could in turn see an increase in customer loyalty to insurers that do this successfully.

Elena Djarlijeva is a senior financial risk manager at Bupa

Lucy Hoppe is the clinical evidence manager at Bupa