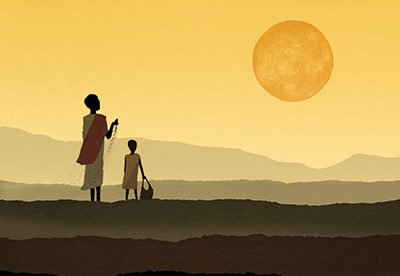 Extreme weather and catastrophic events disproportionately impact the poor. More than 90% of the extremely poor live in politically fragile and environmentally vulnerable countries, and 94% of economic losses from natural catastrophes in low and middle-income countries between 1990 and 2016 were uninsured, so there is clear evidence of a protection gap for disaster risk.

Innovation in disaster risk financing products will prove important in addressing that gap. Global Parametrics is developing index-based (or parametric) financing products that trigger a decision, financial in this case, based on crossing a predefined threshold that captures extreme weather or catastrophic events, irrespective of the actual impact.

A more recent development is in ‘forecast-financing’ (or risk-financing) products that pay before impact occurs. While index-based financing products can be used for virtually any disasters or volatile events, forecast-based products are limited to forecastable events, mainly weather-related events.

One of the first products in this area was regulated forecast parametric insurance in Peru for extreme El Niño events. This innovation boosted humanitarian efforts for forecast-based financing, led by the German Red Cross and International Red Cross Red Crescent, and recently by Oxfam Novib. Forecast-based financing has also been used for floods in Uganda, Bangladesh, Mozambique and Peru.

Parametric products generally use globally available scientific data to develop a statistically informed view of the underlying risk (used for pricing) and to trigger financing at defined return periods (time periods at which triggers are expected to recur). Similar principles apply when developing and underwriting forecast-based products, but they need to account for an additional layer of uncertainty that captures the reliability of the forecasted data.

Forecast ‘insurance’ turns insurance on its head; rather than paying for losses, forecast insurance payments can be used to prevent them. Of interest is the reinforcement provided to the user when financing accompanies the forecast of an extreme event, which should increase the likelihood that the end user will act on the forecast. In other words, forecast products carry both information and financing that should accelerate the building of resilience against disasters. To increase effectiveness and reduce basis risk, forecast products can be structured to make early forecast-based payments, followed by secondary payments as needed to account for events that are worse than the forecast.

As many jurisdictions (including the UK) have two conditions for insurance – insurable interest and proof of loss – the development of regulated forecast insurance products may face challenges in many countries. Nonetheless, derivative risk-transfer contracts can be used to maintain the same underlying structure and economic purpose as a regulated parametric insurance product.

Around 2009-2010, in Peru, Jerry Skees helped La Positiva Seguros make the case that a strong El Niño signal from US National Oceanic and Atmospheric Administration (NOAA) data in November or December was an excellent prelude to extreme rain and catastrophic flooding in the north of the country. Additionally, as Peru has a long history of forecasting El Niño, dating to Inca times or earlier, it was further argued that businesses should use forecasts to prepare, incurring extra costs. Evidence from financing institutions that were restructuring loans in November prior to the extreme 1997-98 El Niño supported the case. The Peruvian insurance regulator was persuaded that a forecast El Niño insurance product was an excellent form of business interruption insurance, and approval was granted in 2010. It is noteworthy that when stakeholders are incurring costs when there is a forecast, the question of whether the forecast is right or wrong becomes less critical – financing is needed in either case.

NOAA has a long history of recording sea surface temperature, dating back to the 1950s, so an excellent time-series of data was available for pricing and underwriting the El Niño insurance.  PartnerRE New Solutions accepted the pricing and provided reinsurance for the first contract sold to a microfinance institution in 2011.

One of the challenges with the El Niño insurance was the requirement to collect premiums nearly a year before payments would be made, as there is enough information at that time to adversely select on the insurer. This slowed the progress of expanding these products in Peru. More innovation will be needed to structure multi-year contracts for this and other weather events (such as drought) that can be forecasted well ahead of the season being insured. These innovations are likely to be enhanced with multi-year insurance-linked security (ILS) instruments.

With assistance from Plan of the Netherlands, we have worked with Oxfam Novib to implement the B-Ready Program. We used historical tropical cyclone track data, including the historical forecasts for each track, to build probabilistic forecast triggers to release cash prior to a typhoon landfall hitting vulnerable citizens. Systems were recently tested in a pilot project in Salcedo, Eastern Samar in the Philippines for the Typhoon Phanfone (known locally as Typhoon Ursula), which affected the area over Christmas 2019.

Our analytics were used by Oxfam to develop a disaster risk financing product that released cash payments to those affected in Salcedo hours before the landfall. Had the project been fully operational with live monitoring, a payment would have been triggered 66 hours ahead of landfall.

With Forecast Financing for Food Security (F^3), we use machine learning to build models to estimate crop yields, using estimates of daily data from general circulation models (GCMs) in the Democratic Republic of the Congo and South Africa. Forecasts of seasonal weather are being used to make early estimates for crop shocks and, alongside the International Food Policy Research Institute, estimates are made of price shocks and increases in food insecurity. Anticipatory financing can save lives and reduce costs associated with slow responses to disasters.

Weather forecast-based products are, of course, reliant on good science and data. They depend on weather data from weather stations, satellites, and physics-based or numerical models, such as GCMs. Limitations of such models still exist – for example, the same GCMs that are used to build reanalysis or history of global weather, make estimates of real-time weather and forecast weather events generally use inconsistent time scales.

Importantly, validation of forecast-based products, such as the ones in the B-Ready Program and F^3, will increase the confidence of the private sector in considering such products as being commercially useful. As a form of business interruption insurance, forecast products can provide early warning and early financing to reduce losses for financial institutions, value-chain firms, agricultural firms, renewable energy firms and even infrastructure projects that are under construction.

There is reason to be optimistic that forecast parametric insurance products will play an important role in addressing the protection gap that continues to challenge financial markets. While these products have been used primarily in low and middle-income countries, they are likely to prove valuable in developed markets, too. Technological advances, and the promise of improved numerical and earth systems models for downscaled weather forecasting, serve to make an exciting future for these products.

Dr Alin Radu is a senior risk specialist and head of Non-Traditional Products at Global Parametrics.