Across the party line 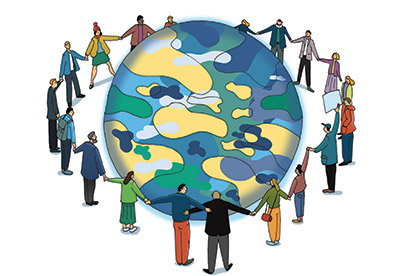 Jo is a trainee actuary, and wonders if it is acceptable to ‘calibrate’ losses across 100,000 simulation years to five years of our in-house catastrophe loss data. She hasn’t realised that we are using exposure-based cat modelling because we cannot use experience pricing for infrequent and severe events; the value of our claims data is limited. That’s why the team has spent ages collecting, cleaning and augmenting the data describing our insured assets and is using a tool that incorporates science and engineering to model potential losses from a catalogue of synthetic events.

Jo, though, is just doing her best with some datasets she’s been given. Cat model results can look odd compared to history – so without informed dialogue between people in different functions, questionable assumptions are easy to make.

The prejudices that actuaries and cat modellers have about each other include that actuaries will fit distributions to anything, regardless of physical constraints, and that cat modellers are only good at mapping data. We need to put these biases away and work together to improve outcomes in three areas: non-modelled natural catastrophe risk, climate change risk, and casualty and cyber risk.

Collaboration is particularly valuable when working with risks that are less well understood and where there is debate about appropriate measures of exposure and modelling techniques.

Cat models were originally developed for peak territories and perils; the insurance industry’s uptake accelerated after Hurricane Andrew in 1992. However, as every new cat event added to the limited consistently recorded industry claims data, there were developments and discoveries of elements that were missing or only partially included in the models.

One example was the unexpectedly high claims from the destruction of floating casinos during Hurricane Katrina in 2005. These had been described as land-based structures by many exposure analysts, meaning loss potential was significantly understated. This led to heavy emphasis on better input data quality.

What about the models themselves? There are many examples where claims sources have not been included, as well as areas where models do not exist. Following work published by the Association of British Insurers in 2014, ‘non-modelled’ risks are typically thought of as elements ‘missing from the model’ and considered under groupings of regions and perils, coverages, secondary perils and classes of business.

"Without informed dialogue between people in different functions, questionable assumptions are easy to make"

‘Model’ here is often taken to mean a vendor cat model. However, the use of ‘non-modelled’ can be confusing because, although sources of loss may not be in the vendor model, they should still be accounted for in the internal model. An example of this is the secondary peril of tropical cyclone rainfall-induced flooding, which can increase hurricane event losses. This peril should be included in the cat risk representation so that it is complete, and back-tested using claims from hurricanes where there has been a large flood component.

There are also cases where a risk may not explicitly be included in the cat risk representation but is captured elsewhere in the internal model – for example, wildfire is sometimes included as part of the attritional loss distribution. It is often clearer, therefore, to focus on showing how the model is complete, identifying where each element is considered and then articulating what is explicit, how the quantum is understood and what remains implicit throughout the modelling process.

Capital modelling actuaries and cat modelling teams must be able to clearly articulate model completeness and work together to identify where and how elements are captured, as well as ensuring risk representations remain up to date by including factors such as social inflation.

Since 2019 the Prudential Regulatory Authority has required insurers to have a senior manager function responsible for identifying and managing financial risks of climate change. This remit covers governance, risk management, scenario analysis and disclosures.

Climate change alters risks by changing existing physical risks and by introducing new risks during the low-carbon transition. In the case of physical risks, climate change is a risk multiplier that will modify the risks we currently experience. The good news is that quantification of the risks associated with extreme events is something cat modellers have been considering for decades. However, it is not always well-understood that cat models do not usually have ‘climate change’ event sets and that climate models themselves are not especially good at capturing extreme weather. The impact of climate change on extreme events, which constitute peak perils from an insurance perspective, is therefore even more difficult to ascertain than is often assumed.

Intergovernmental Panel on Climate Change reports communicate confidence around changes in extreme events. Although there is high confidence for temperature increase, with potential impacts on health, productivity and mortality, temperature itself is not one of the capital-driving peak perils from a non-life insurance perspective. Outcomes with highest confidence from this perspective include sea-level rise and rainfall increase, which may result in increased flooding.

When the climate modelling output for specific extreme events is uncertain, and events are so infrequent that the climate will have changed significantly by the time we see the signal for them, it can be challenging to know what approach to take. However, progress can be made by understanding where a physical mechanism means change is likely. These cases can then be prioritised.

Actuaries tasked with climate change analysis should call on the expertise of their colleagues, many of whom have experience interpreting scientific literature and may be able to establish where best to target efforts to align physical climate change risk considerations for a portfolio. At a minimum, they will have experience considering the frequency, severity and spatial distribution of atmospheric perils and the strengths and limitations of cat modelling approaches.

Collaboration between exposure management, underwriters and pricing actuaries for cat risk is very common. Collaboration with reserving actuaries is more limited and is primarily when estimating losses after large events.

However, the frontiers of exposure management are changing. There has been a focus for some years on better understanding cyber risk, and more recently on the impacts of incorrect reserving for casualty lines. Regulatory scrutiny has also increased. However, exposure management in these areas is less well developed, with little agreement about appropriate exposure data – or what the perils are. In these areas, there is no easy spatial mapping; new and different modelling tools, particularly using network approaches, may prove more appropriate.

Long-tailed exposure does not get a lot of attention from the exposure management community, and reserving expertise is essential for understanding development patterns, so dialogue is essential.

Complementary skills are, in many cases, a requirement for a high-performing team. Our industry is making strides towards diversity, but sometimes it is a challenge to take this attitude across teams, where people have different functions, views, training and ways of thinking about risk. Exploring the assumptions shaped by these differences is important in a world where the truth is unknown and making estimates is paramount.

The best organisations have joined up processes, with a culture of collaboration and feedback where the implications from one area are extrapolated across the whole organisation.

If you are a general insurance actuary, I would urge you to think about how you can supplement the work of exposure management colleagues – whether you are working in a cat team or elsewhere in an organisation.

Kirsten Mitchell-Wallace is head of risk aggregation at Lloyd’s and one of the authors of Natural Catastrophe Risk Management and Modelling: a Practioner’s Guide