InsTech and the innovation boom 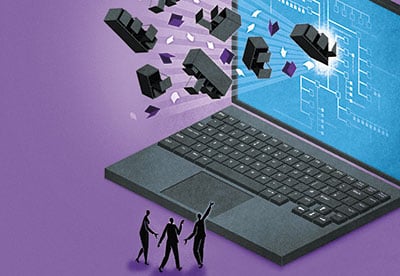 ‘InsTech’ is growing at a rapid pace, says Paolo Cuomo, as he outlines what companies are doing to take advantage of the innovations in technology available in the industry

What do drones, a robot called Boris, start-ups with names such as Spixii, Trov and Sweatcoin, the London Market Innovation Exchange, Blockchain, machine learning and a bootcamp for startups have in common? They’ve all played a part in this year’s meteoric growth around the topic of ‘insTech’ in London. But this is not just some trendy new idea in EC3. InsTech as a topic is le mot du jour globally, sitting at the top of insurance conference agendas across the globe, from the usual London, Zurich and Monte Carlo, to very ‘non-insurance’ locations such as Las Vegas, Barcelona and Cologne.

So, what is insTech?

InsTech or insurTech is shorthand for ‘insurance technology’ or the topic of technology-driven innovation in insurance. It mirrors the term finTech, one that’s been in use for a number of years. It became common parlance with start-ups and innovators in 2015 and hit the mainstream at the start of 2016.

InsTech covers a whole range of technologies and their applications, but one of the main strands involves data, creation of more data, collection of more data, analysis of that data and data-driven decision-making.

For those who like hyperbole, there’s  plenty of irrational exuberance to get excited  about, but the more cynical among you  should not forget Amara’s law, which states:  “We tend to overestimate the effect of a technology in the short run and underestimate the effect in the long run.”

As you may be aware, 27 October this year was the 30-year anniversary of the ‘Big Bang’. That change was as much about regulation as technology, but as Iain Martin details in his new book, Crash Bang Wallop, there were plenty of people who didn’t believe a computer-based data exchange could ever replace the traditional ways of working.

Those most bullish about disruption are saying the combination of almost infinite, real-time data from telematics, smart homes, social media and the internet of things (IoT) will fundamentally change the way we understand and price risk in classes as diverse as personal motor, med-mal and marine cargo. Not just the ability to better understand the risk at the start of the policy year but also the ability to consider the change in the risk on a near-real-time basis throughout the year. How many of us are set up to do that?

Two of Munich Re’s recent investments have been in Trov and Slice Labs. Both offer types of UBI (usage-based insurance) for personal goods and property cover. Cuvva (a Glasgow-based start-up) offers a similar service with by-the-hour motor cover. How many of us have  systems (or mindsets) that allow us to price, communicate and bind instantly on an app for a four-hour camera, a one-hour motor or a two-day home cover?

Taking it one stage further, what will happen when we apply machine learning to risk analysis and pricing? Many insurance regulators require the ability for the carrier to explain the rationale behind pricing – if a blackbox machine learning tool, pulling in thousands of data elements, is able to more accurately understand and price risk, what does that mean?
Take telematics – companies such as The Floow now have data about how people apply their brakes at every road junction in the UK (and increasingly in the US and China).

Then there is the IoT, where companies such as Neos or Domotz are gathering staggering amounts of data about how you use your home. Satellites now take super-hi-res photos of much of the earth’s surface dozens of times a day – allowing companies such as Sky-Futures to let a claims manager ‘see the past’. Dtex Systems can build a near-perfect image of how every employee in a company is interacting with its hardware and software. These are companies you have never heard of doing things you never imagined you were interested in.

We’re not even talking about this in our organisation. Why not?

As with many changes, things that feel big when you’re in the middle of them are not necessarily that large in the grand scheme of things. $1bn of insTech investment in the first half of 2016 may seem large compared to the tens of millions in 2012 or 2013, but it’s still almost irrelevantly small in the context of other insurance industry investments and the current wave of mergers and acquisitions.

As such, in most carriers and brokers there will be few people formally considering the technology innovation topic. The conversation is shifting however, as boards and leadership teams realise that technology innovation is part of the answer to many of their strategic challenges, rather than simply a distraction.

The relevance of the change also varies by what your company does. Much of the initial change is happening in the business-to-consumer space, where different ways of engaging with personal lines products, such as UBI, robo-broking and mobile-based know-your-customer can get immediate traction. Those working in commercial lines or the Lloyd’s market may not be affected so soon.

Similarly, change happening deep in the back-end – where, for example, machine learning is helping to improve fraud detection in motor and health insurance – may not be immediately visible to someone working in a reserving or capital team.

The warning, of course, is that if you wait until a new topic is front-of-mind before you engage in it, you’ll be starting with a distinct disadvantage compared with your peers and competitors. One young reinsurance buyer approached me recently, saying: “I’ve no idea how all this insTech stuff will impact what I do, but I’d prefer to be the one working that out, rather than simply have it done to me in five years’ time.”

But is this just talk or is something actually happening? A year ago, this might have been harder to answer. Now it is an unequivocal: ‘yes – there is genuine traction’. Venture Scanner is now tracking well over 1,000 insTech companies, conferences focused on insTech are two-a-penny, and many of the large carriers have an accelerator or insTech investment arm (Allianz and Munich Re appear to have two accelerators each).

According to this summer’s Pulse of FinTech report, from KPMG International and CB Insights, VC-backed insurTech investments hit $1 billion across 47 deals in the first half of 2016, building off $2.5 billion of investments in 2015.

At this year’s GIRO conference, the term insTech may not have been in broad use, but the theme of technology ran deep. Similarly, looking at the lead articles on the  www.predictions2016.com website offers up the words digital, data science, machine pricing, telematics, robo-investors and Blockchain.

Why now?
Eighteen months ago, when I co-founded InsTech London, there were very few  people talking about the insTech space. The growth has been driven by a combination of factors, including:

The term ‘technological singularity’, brought to prominence by American futurologist Ray Kurzweil, refers to the point at which machines becoming smarter than humans and so can start upgrading themselves faster than we could, leading to a runaway cycle of self-improvement. The general consensus is this point could be around 2040.

We are already seeing the combination of IoT-supplied data and basic machine learning making huge strides in supporting actuaries to do their work. Which year will it be that Edward Tredger or Alex Marcuson does a GIRO keynote speech convincingly showing the robot replacing the human?

Each of these is affecting different aspects of the insurance value chain in different ways and at different speeds, but using this list as a starting point allows you to start thinking about what change is coming. For those of you who care most about data and data analytics, the first, fourth and sixth items in the mnemonic are the ones to start understanding better.

Various initiatives are under way in all  the usual insurance hubs. Here in  London, we are blazing a very healthy trail.  The InsTech London community now  stands at well over 1,500 people, while  the London Market TOM programme has recently launched its Innovation Exchange initiative, aimed at everyone operating in  and around EC3.

Signing up at www.instech.london is the simplest single way to engage with the conversation in London and further afield. For those of you based outside EC3, who’d like to get more involved, the insTech ecosystem would embrace ideas and activities from around the UK and abroad.