Want to get an insurer’s attention? Just say blockchain 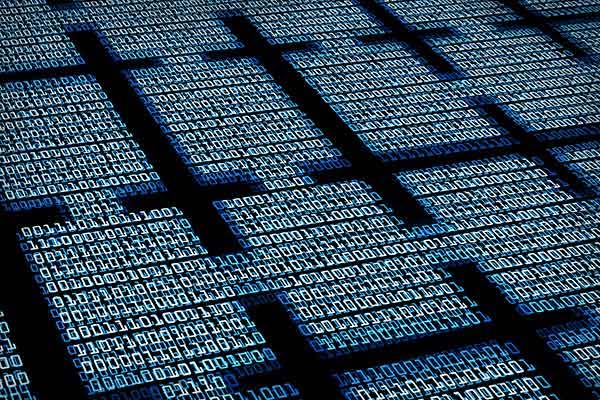 Certain insurance innovation and technology topics have commanded attention over the past six months, and blockchain is one of them. The discussion around unicorns – private companies valued at $1 billion or more – new players and start-ups trying to disrupt insurance has shifted from ‘who?’ to ‘what?’ and ‘how?’. Social media hashtags such as #fintech and #insurtech are increasingly connected with #blockchain.

Blockchain is a distributed digital ledger technology. In other words, it is a technology that records transactions between links or users,usually computers, on a decentralised network. You can imagine the blockchain as a shared, unbreakable, endless, digital tower of Lego blocks that is copied into every user’s computer. Each block represents a legally valid record of a transaction or contract. This chain of information blocks keeps adding chain links with every new transaction and cannot be modified in its transaction history.

Blockchain technology may solve many problems the insurance industry faces. It could reduce administration and claims processing costs, make underserved segments more accessible, enable spot insurance – immediately issued contracts, or increase transparency in peer-to-peer (P2P) insurance. Many believe that blockchain will radically change our world, in the same way the Internet did, and that today it is still in its infancy, comparable to the World Wide Web in the early 1990s. Blockchain began in 2009 as the technology that enabled the virtual currency bitcoin, but its use has rapidly expanded to automate almost any type of transaction in innovative ways (Figure 1). 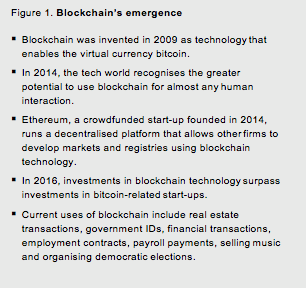 In the insurance industry, innovative incumbents are racing against new players such as Google and Alibaba and over 400 technology start-ups to develop and own solutions with the power to disrupt insurance design, pricing, distribution and administration. Many of these ventures are exploring blockchain, and some, such as the Mexican micro-insurance providing supplemental unemployment insurance through an Ethereum-based P2P insurance product. Ethereum is a decentralised blockchain platform.

Why blockchain is revolutionary

It is decentralised, so there is no single party in charge of the network, nor storing or owning the information contained in the ledger.

It is believed that it cannot be corrupted or hacked, since every single participant in the network holds a complete history of the transactions in the ledger. The records of issuance, transfer and ownership of assets transacted in the network are recorded permanently in the ledger and stored by every user participating in the network. To modify it, one would have to be able to alter every existing record, attacking all existing users simultaneously.

Data flows are public, but also fully encrypted: blockchain first verifies the identity of participants in a transaction and then guarantees the deal is not corrupted by ensuring that data cannot be modified or intercepted.

How blockchain could disrupt insurance

Blockchain offers the potential to fully automate claims processing for index insurance, which determines payouts based on a predetermined index and other data-driven products. For example, smart contracts use blockchain technology that self-executes by responding only to certain triggers to transition from one contractual state to the next. Smart contracts are not controlled by a central authority, tampered with or modified. Their input is from so-called oracles that connect directly to validated sources via the Internet.

Recently, during a hackathon gathering of computer enthusiasts in London, InsurETH developed a travel insurance product using Ethereum to pay out claims for delayed flights automatically. Microinsurance products such as crop insurance or weather-based insurance are further examples of products that could potentially eliminate claims processing costs using blockchain-based smart contracts. Rule-based claims processing that relies on external data – ranging from publicly available weather data to data stemming from the Internet of Things (IoT) – could allow for new product designs that automatically trigger and approve claims, reduce fraud and improve customer experiences. Imagine smart product insurance that would automatically respond through a combination of smart contracts and the IoT when an appliance malfunctions or ceases to work.

Similarly, insurance telematics devices could connect to a smart contract after an accident to initiate the claim in real time and reduce repair costs by connecting the insured with preferred vendors. Smart contracts can also use so-called vote-based oracles to make decisions based on the majority decision of a group of participants. For example, some start-ups are exploring vote-based claims processing and incentive models that could use social media or crowdsourcing to decide whether to pay a claim.

While insurance carriers currently operate in a regulated marketplace, new players such as ChainThat are forming a decentralised insurance market using blockchain-enabled smart contracts that automate all of their communications and transactions. Transactions are registered in a distributed ledger using blockchain technology without the need for a physical central authority overseeing the marketplace. Data duplication and processing delays cease to exist, transaction costs are significantly reduced, no redundant or non-critical data are stored and there is increased security since every participant in the consortium network owns a full copy of the ledger. This virtual marketplace also reduces fraud risk and brokerage costs since every piece of communication during negotiations is registered and stored in the ledger. This new, fully digital and mobile-enabled approach also benefits consumers with convenient access and real-time individualised pricing.

Blockchain is a very powerful instrument for disintermediation. A decentralised consortium network of insurance carriers that manages all of its transactions online could eliminate the need for intermediaries for less complex coverages such as auto insurance and mass-market products. Use of smart contracts on a digital platform could increase pricing efficiency and boost direct sales channels. More specifically, blockchain could increase efficiency by automating identity validation, which would eliminate the need for face-to-face registration. Compliance could also be programmed into the blockchain to verify policyholders, service providers and claims automatically. In an even more connected world, virtual insurance entities could directly access and use blockchain-registered property titles, blockchain e-identification cards and blockchain- stored health information to make decisions and execute transactions without the need for notaries, lawyers or insurance brokers.

Decentralised networks using distributed ledgers have another great advantage: data are accessible to all. While data can be encrypted and anonymised for privacy reasons, insurance platforms powered by blockchain will enable back-end data sharing for analytics and pricing. In a world where voluntary sharing of information by consumers via wearable devices and usage-based insurance, for example, will continue to increase risk transparency, any technology combining big data analytics with automated access to external data and large, real-time databases on claims and demographic data offers the potential to disrupt the market. This is even more likely when processes are self-governed and allegedly impossible to corrupt.

For P2P insurance start-ups such as Friendsurance in Germany, Guevara in the UK or Lemonade in the US, blockchain solutions can increase transparency, reinforce the decentralised nature of P2P products, eliminate administration costs and introduce protocols to approve claims (for example, through vote-based oracles) as well as automatic redistribution of excess pooled funds. Blockchain can also increase flexibility for consumers while decreasing costs for hybrid insurance products needed in the sharing economy, for example, Uber or AirBnB, where the commercial versus personal use of goods is blurred.

Among micro-insurance’s many challenges are the lack of reliable data and identification documents from the target population, the need for simple products that can be quickly bought on mobile devices, and the huge acquisition and administration costs associated with very low customer loyalty and a high volume of policy cancellations. Most of these issues can be mastered with completely mobile platforms that use smart contracts.

Blockchain still has many shortcomings. It is currently unable to handle very large volumes of transactions at an adequate speed such as in high-frequency stock trading, as was proven in the last round of solution trials conducted by R3, a blockchain technology company. The extent to which blockchain could be used globally, multiplying immense amounts of data in all participating nodes of a network, raises questions about data storage space and optimisation. Blockchain also struggles with two-way transactions, which may need multiple parallel, synchronised blockchains. The good news, though, is that incredible amounts of resources are currently being devoted to solve these and other limitations. The Sydney Stock Exchange is building a new trading system based on blockchain, and insurer PingAn is the first Chinese firm to have joined R3CEV, a blockchain consortium start-up.

Regulators and central banks have blockchain technology and platforms on their agendas. For blockchain-enabled solutions to work sustainably, regulation and a certain amount of oversight will be necessary. In a global and fully scaled setting, shared economies and P2P networks cannot work as parallel, fully decentralised markets without a formal assessment of their risks and a certainty that the network has adequate risk-return calculation capabilities. It is hard to imagine regulators permitting a fully unregulated system without capital reserving. Blockchain technology could become systemically important and blockchain networks ‘too big to fail’ if predictions on its development prove true.

Given blockchains have almost perfect recording ability, the transparency, accuracy and efficiency of blockchain-enabled insurance markets should significantly improve, and the elements and data needed to regulate will automatically exist. Still, regulators will have to develop innovative ways to oversee self-governed networks with no central entity responsible for its functioning.

Clearly, exciting times await insurers, and 2016 may be the year when many of these insurance and financial technology ventures achieve a breakthrough. If many of the companies and products mentioned in this article were formerly unknown to you, it is time to start following #blockchain and #insurtech hashtags.